Christine Lagarde will take over from Mario Draghi. According to analysts plus her previous comments on Ripple, this is bullish for XRP. However, that is not enough to prop XRP, which is down 10.5 percent in 24 hours.

The so-called XRP Army is known for its ferocious protection of Ripple and XRP. Supporting the third most liquid asset in their swarm and vigor, they tear down critics-regardless of the objective or validity of their questions. Their effort has seen Binance make XRP base currency.

Besides, for their tireless effort, they had a response from Microsoft’s Skype. Although their request is still in consideration, their role is indeed significant. After all, overt support from the community is that cog that keeps the project’s wheel rolling, replenishing morale.

Overly, Ripple’s goal is to expand as a global payment settlement platform. Even so, according to their Head of Global Banking, Marjan Delatinne, their objective is not to compete with SWIFT and other rival platforms per se but to complement them.

Presently, the focus is on Christine Lagarde. A politician and serving as the Managing Director of the IMF, the finance figurehead synonymous with the Bretton Woods Institution member, is open to cryptocurrencies and interestingly keen on Ripple.

Insisting that banks and financial institutions must adapt to remain competitive, her view is supportive of cryptocurrencies in general. Although the European Central Bank (ECB )is rigid, recently saying Bitcoin is not a currency but rather an asset, her taking over from Mario Draghi could change the European’s regulator view. 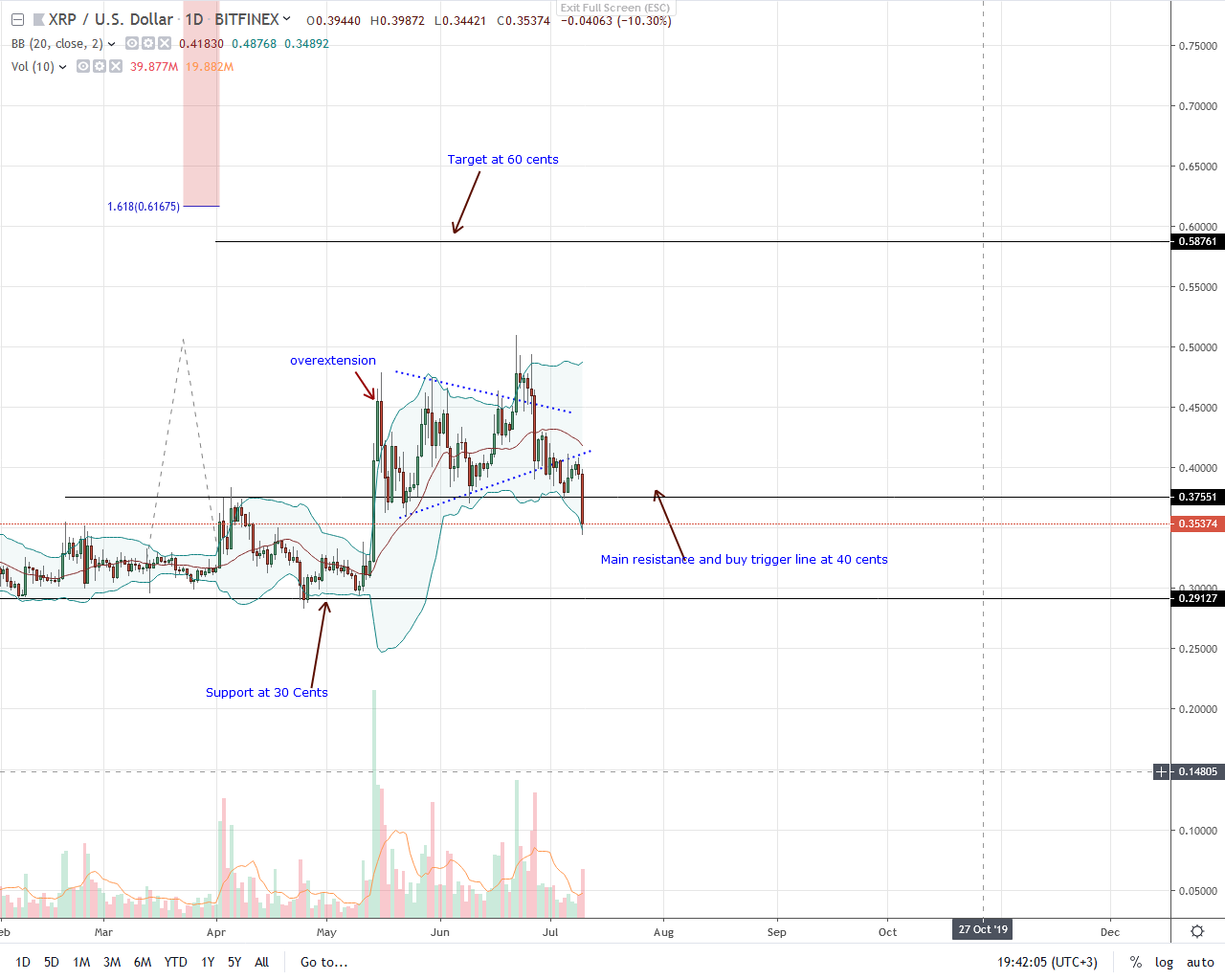 At the time of writing, XRP is in a free fall, crashing below April high with an uptick in participation. By dropping a massive 10.5 percent in the last day, price is trading below the main support level at 40 cents.

At this pace-and assuming there is a buildup of panic sells because of today’s meltdown, prices may crash and close below 34 cents invalidating previous XRP/USD trade plans. Presently, prices are back to consolidation and to the 15 cents range with caps at 50 cents.

Because of previous assertions, traders should take a neutral stance while being cautiously optimistic. Even so, any breach of 34 cents nullifies this trade plan’s bullish outlook as bears are likely to drive prices to 30 cents, retesting Q1 2019 main support level.

There is a sharp spike in trading volumes confirming losses of June 27. The upsurge in participation from 11 million to over 35 million is a signal of weakness. Because of this, it is highly likely that XRP may drop to 30 cents in a retest of Q1 2019 support.