Prices are stable but not consummate with fundamental factors. With Ripple Inc striking deals and signing partnerships, Ripple (XRP) demand should be higher reflecting demand. However, that is not the case as XRP/USD range inside a 4 cents zone.

Because of the nature of crypto and expectation of project supporters, an influential position within the project’s hierarchy is akin to a political role. Perhaps that’s why Satoshi Nakamoto, the founding father of blockchain and Bitcoin has his privacy kept as a close to the chest. He or she chooses to remain anonymous and to some extent, considering all the media attention in recent days, David Schwartz may be wishing to be away from the public limelight just like the public-shy, Arthur Britto. He’s brilliant, and Ripple Labs spokesperson said: “Arthur is an introvert and super private and he has no desire to be a public figure due to personal reasons.”

If anyone can prove me wrong with a picture of either – I will convert my XRP to BTC, and give you 1x BTC ? pic.twitter.com/jfyii3aKyr

Undoubtedly, he is an important cog in Ripple Inc and indeed Ripple Labs, “conceiving the idea of Ripple with McCaleb, the current CTO of Stellar” before later involving Chris Larsen. After selling part of his XRP holdings, said to be three percent of the total circulation, he came under public scrutiny with some Twitter analysts saying it was indeed a straight forward signal that the third most liquid asset is bearish. Nonetheless, Ripple (XRP) is under pressure and immune to Ripple Inc progress of striking partnerships with leading banks and fund transfer firms as SABB. 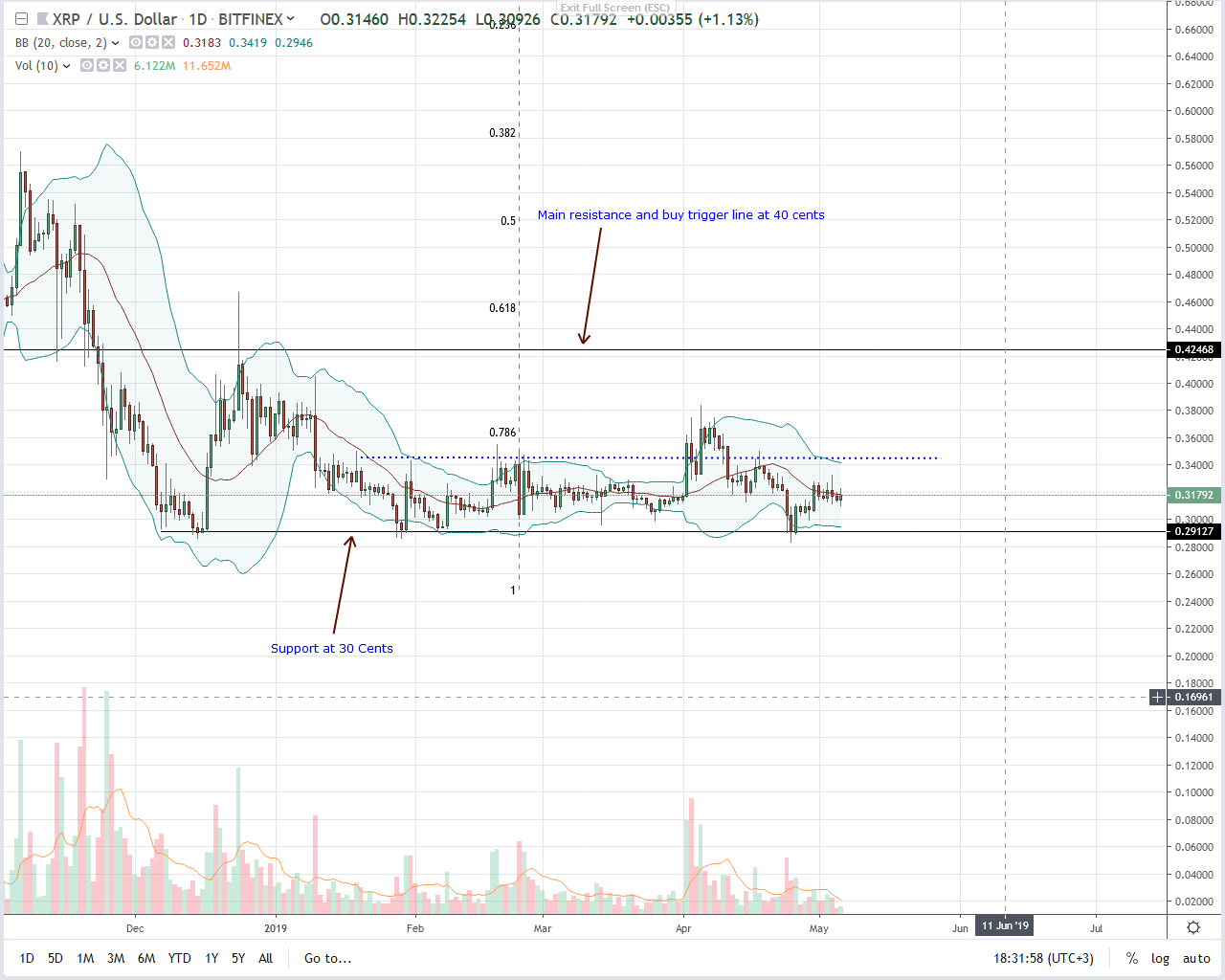 At spot rates, Ripple (XRP) is stable adding 1.4 percent in the last week. Even so, technical candlestick arrangement points to an asset under sell pressure. Although it is until after XRP prices drop below Q1 2019 lows of 30 cents or Jan 30 lows, traders are cautious. It is easy to see why.

From an effort versus results point of view, the lack of conviction from buyers to comprehensively reverse losses of Apr-24-25 is bearish. However, the consolidation inside Apr-30 high low—a bullish candlestick is positive for traders.

Nonetheless, before we initiate longs, traders must wait for gains above 34 cents as the double bar bull reversal pattern of Apr-25-26 is validated. On the flip side, losses below 30 cents must be with high volumes exceeding yesterday’s average and most importantly, those of Apr-3.

As aforementioned, buyers are struggling. However, candlestick arrangement points to bulls in line with Sep 2018 upswing whose high-low is where prices are oscillating in. For trend continuation, prices must rally above 34 cents and accompanying this reversal must be volumes exceeding 36 million or 98 million of Apr-3.