The SEC is bending for innovation’s sake, and that’s great. Cryptocurrency and blockchain are complex topics, they are a blend of different fields and all of a sudden are disrupting. Ripple may benefit, but clarification on the regulatory status of XRP will propel prices higher.

Blockchain and crypto, in general, is an innovation competition. It’s all about who will devise the best solution, an option that will take on existing legacy system(s). Thus far, there are thousands of projects that seek to dethrone Ripple and Bitcoin. While Bitcoin is the most capitalized, Ripple has grand visions.

From first glance, it may seem insurmountable considering their goal of clipping SWIFT’s market share. However, in recent years, Ripple has been scoring small victories. Of the many, their aim of on-boarding banks and financial institutions to a faster network that is transparent and encrypted is bearing dividends.

Although not many banks are synced and not ready to upgrade to the latest version of xCurrent, the fact that they are listening to what Ripple has to offer is a big plus. Even so, it may take time before there is a full switch to xRapid.

The option uses xCurrent rails while incorporating XRP, a coin that is facing regulatory challenges in the US. It acts as an on-demand medium of exchange; a liquidity tool which, when fused with Cobalt, will see transactions settle in a second or less. 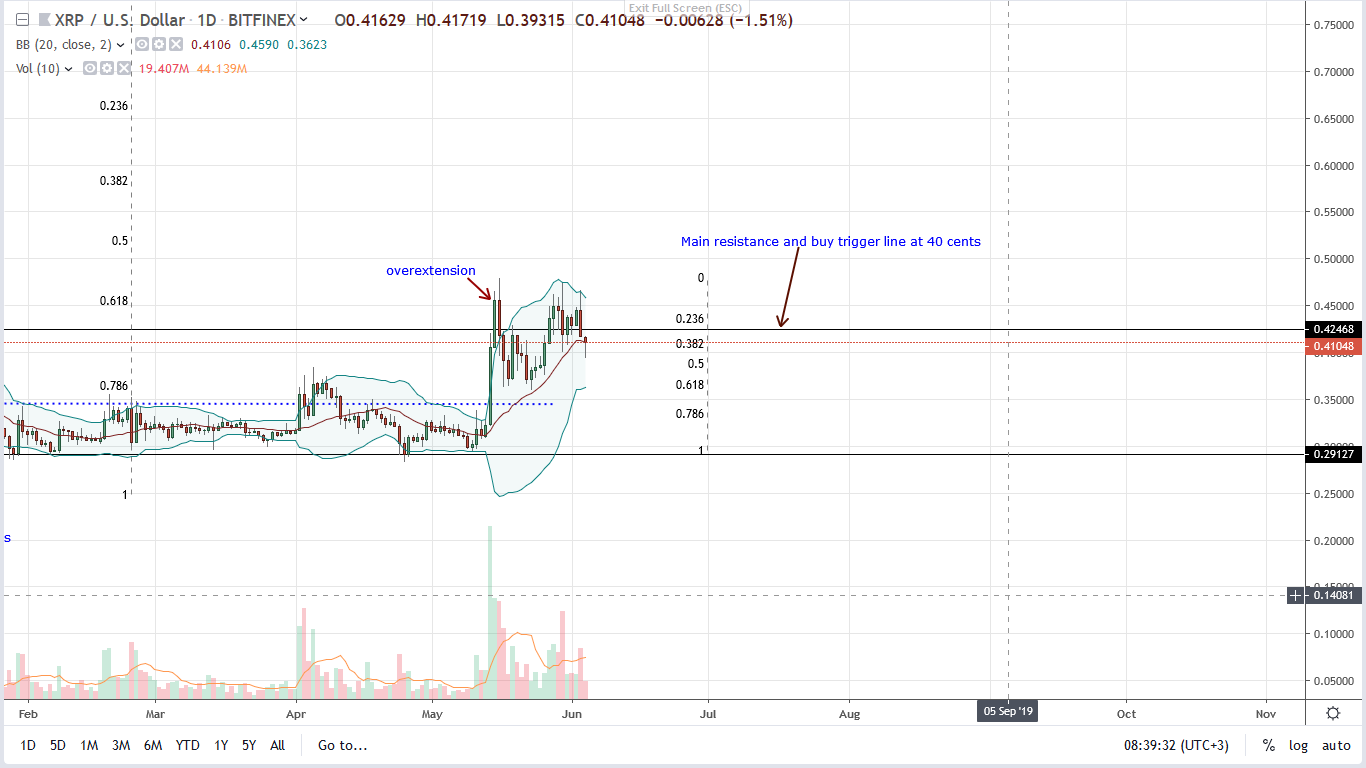 Trailing Cardano, EOS and Bitcoin Cash, XRP is down 9.1 percent from yesterday’s close. Even so, XRP is trading within a bullish breakout pattern but under pressure after yesterday’s rout. However, and in line with previous XRP/USD trade plans, it is essential that the race to 60 cents be at the back of increasing trading volumes.

From what is visible in the daily chart, momentum is shrinking as participation taper. That is derailing the rally, delaying the up-thrust and desired clearance of May high. If anything, any blast above 50 cents will cement buyers. After that, it will set in motion the next wave of higher highs following the bounce from the 61.8 percent Fibonacci retracement of May trade range.

At the moment though, the middle Bollinger Band (BB) acting as flexible support no longer holds. Odds are therefore stacked against buyers. If today ends up bearish, XRP could slide back towards the 61.8 percent Fibonacci retracement of May trade range or worse lower to 30 cents.

Anchoring this trade plan is the breakout bars of May 14th and 15th. Their average trade volume is around 150 million. Any breach above 50 cents or drop below 43 cents ought to be at the back of high trading volumes exceeding 150 million. That will confirm buyers of Sep 2018 or nullify this trade plan.