The idea of a duo currency economy with negative interest rates is feasible says the IMF report, and that is massive for cryptocurrencies. Adoption could see a migration to inflation proof and global coins as Litecoin (LTC) and Bitcoin.

Crypto is a rebel coin, an alternative currency borne out of financial desperation. At the height of the great financial crisis, value was pulverized.  A dropping USD had a cascading effect did damage livelihoods.

From lost value and QE to “prop the economy”, the world has never been the same. The economy is recovering ten years after the economic catastrophe. What we now have are ultra interest rates, a recovering global economy but general indifference to invest as different central banks toy with the idea of negative interest rates.

From a recent IMF Staff study, it reveals that it is indeed possible to design a duo currency system that works in the interest of the economy even if interest rates are sub-zero. In such a case, digital currencies are likely to flourish.

“In a cashless world, there would be no lower bound on interest rates. A central bank could reduce the policy rate from, say, 2 percent to minus 4 percent to counter a severe recession. The interest rate cut would transmit to bank deposits, loans, and bonds.” 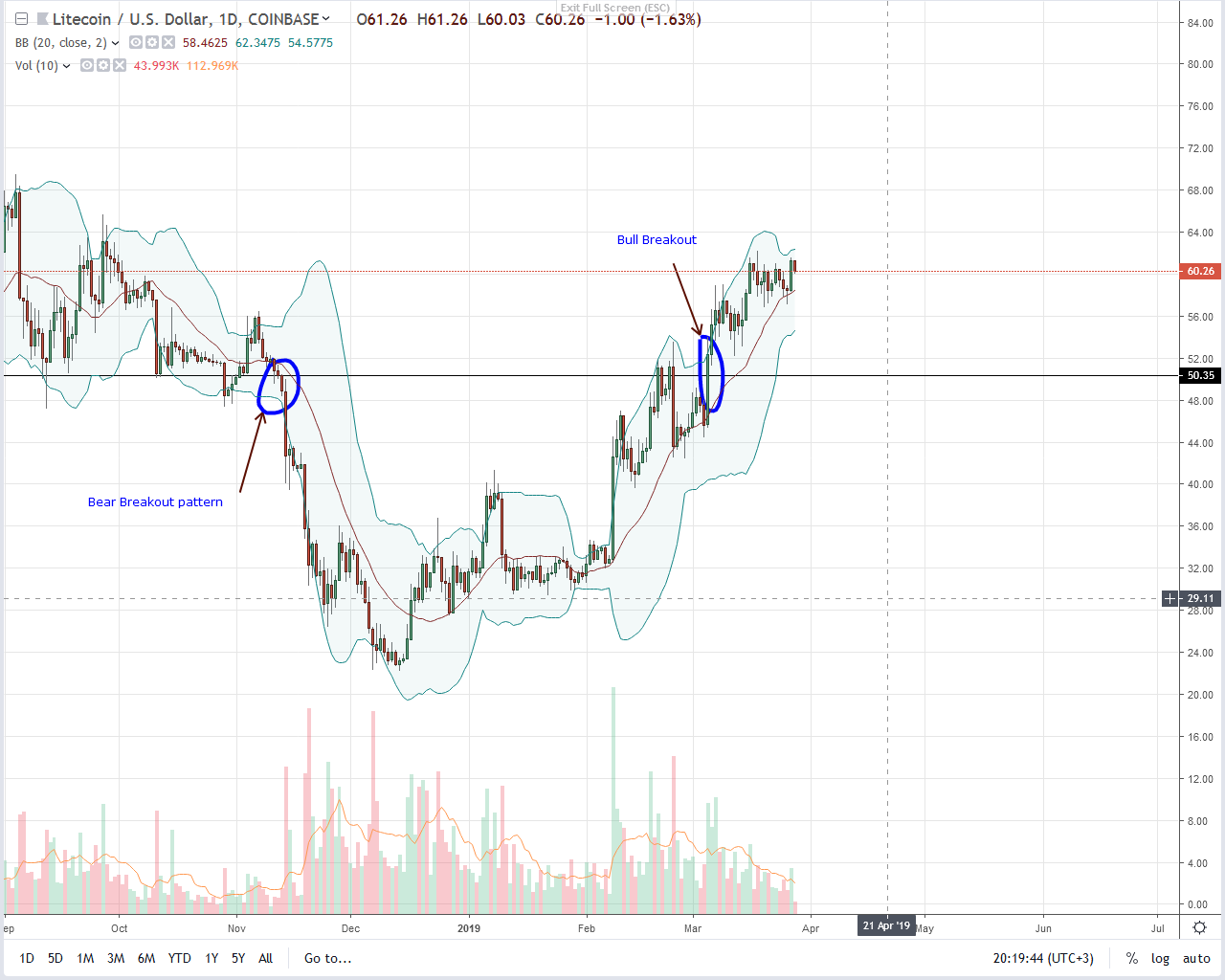 Like Bitcoin, Litecoin is trading within a bullish breakout pattern but with massive liquidation at $62-65 zone. Even so, we expect prices to recover, break above this minor consolidation and race towards $90. However, the only way for that confirmation is a buildup of strong bull momentum that would thrust prices above Mar 16 highs while confirming the three-day bull reversal pattern of Mar 25-27.

Such a move reaffirms the bull breakout pattern of Mar 5. All the same, we should point out this deterrent. In the daily chart, there are hints of weakness now that Litecoin (LTC) prices are printing lower relative to the upper BB.

That is why it is important for prices to rally above $65 because if prices drop below Mar 26 lows at $57 and below the middle BB, LTC could slide to $50 in a retest phase.

Our anchor bar is Mar 16—254k, and in an uptrend, any break above $62 must be with high transaction volumes above 254k and even 407k of Mar 5. Mar 27 bull bar had a high ATR but with low volumes—168k meaning risk-averse traders should be on the sidelines until when our trade conditions are right.