The Path To Evolution Is Behind Dash’s Resurgence, Add 5.4%

Before Evolution, the latest Dash upgrade introduces ChainLocks. It is a shield against the disastrous effects of a Majority Attack. Since the benefits of Evolution are massive and instills confidence, Dash prices responded. At the time of writing, it is up 5.4 percent from last week’s close.

Capitalizing on a horrendous leadership, Dash is quite literally replacing the worthless Venezuelan Bolivar. Decimated by hyperinflation, cryptocurrency is, by and large, the perfect choice for Venezuelans.

Perhaps to bulwark its network against attacks, which can be government-sponsored in some scenarios, Dash upgraded. Introducing ChainLocks, the system can successfully rebuff attempts of a Majority Attack. Besides, Dash holders can instantly “re-spend Dash upon receipt via Long-Living Masternode Quorums (LLMQ)-Based InstantSend.”

Always building towards Evolution, this software improvement sets Dash apart from competing networks with similar purposes. Bitcoin Cash, for example, pitch their services under the same theme. However, it lacks in numbers, and the overly, the median transaction value says it all.

On the contrary, Dash is already striking partnerships and creators are steadfast on its road map. Ideally, the activation of Evolution will be momentous for the network. By radically introducing features that first and foremost place clients at the fore, Dash settlement speed will sharply improve while simultaneously boosting security. That will be on top of blockchain user names and contact lists replacing cryptographic hashes that are complex, slowing down adoption. 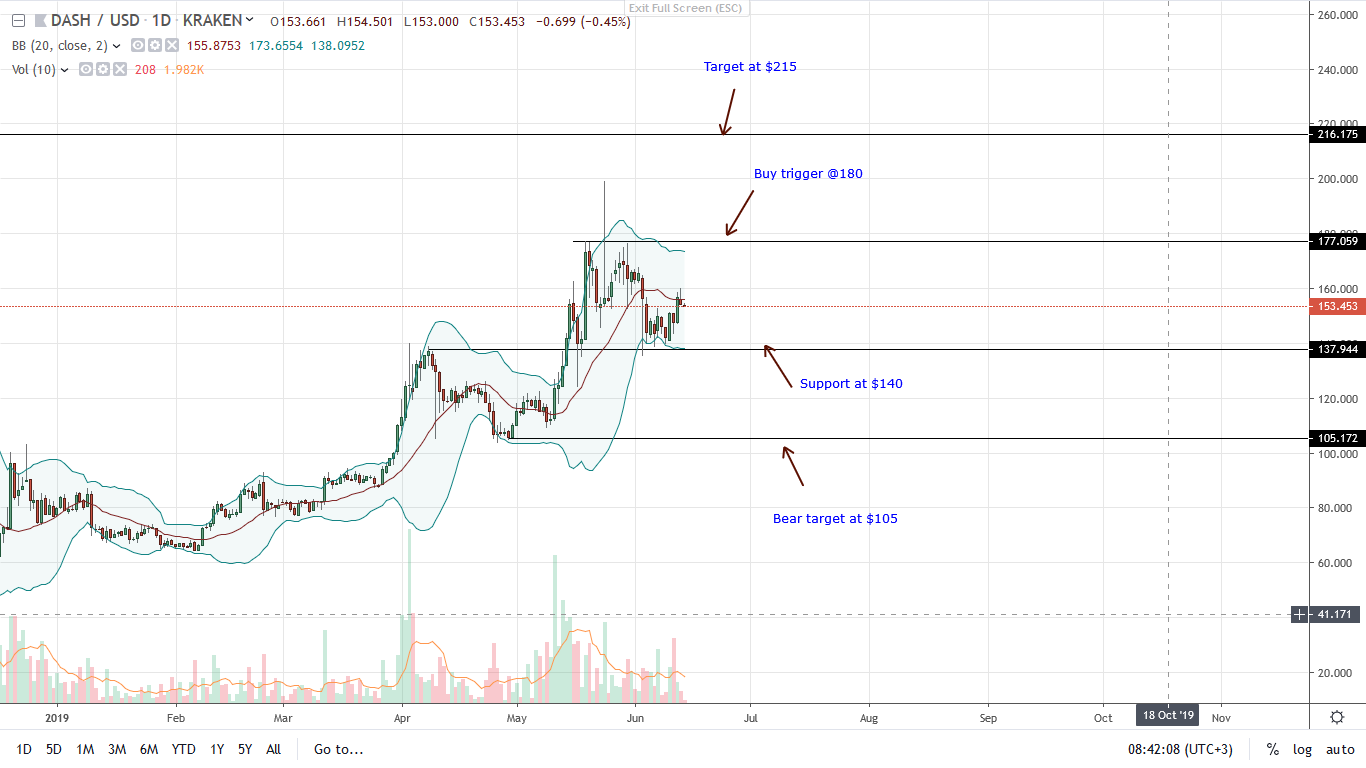 Currently, Dash is languishing at 16th with a market cap of $1,365 million, adding a mere 5.4 percent week-to-date. Nevertheless, like most crypto assets, there is an overall recovery in price. Trading in a bullish breakout pattern, Dash bulls in the driving seat. Thanks to the dips of late May and early June, the retest phase is complete.

Marking the rebound is a three-bar bull reversal pattern of June 3rd through to June 10th. With increasing trading volumes, bears were slowed down. Because of this, there is an opportunity for traders to buy the dips while aiming at $180.

Fitting safety net will be at $140. On the other hand, conservative traders can wait for clearance of May high at $180. Once that prints out, traders can flow back with a modest target of $215.

In light of the above, any break above $180 ought to be with high participation. As a result, the May 25th inverted hammer anchors this trade plan. Behind the rejection of higher prices are high trading volumes of 6k.

Therefore, confirmation of buyers should be with equally high trading volumes lifting prices above $180 to $215 in a buy trend continuation.

Tags: ChainLocksDashevolution
TweetShare11
BitStarz Player Lands $2,459,124 Record Win! Could you be next big winner? Win up to $1,000,000 in One Spin at CryptoSlots