Of all the coins in the top 10, TRX is the most attractive. It is leading the recovery and up 6.7 percent in the last day. Part of this is because of supporting fundamentals—BTT crowdfunding and dApp dominance and not forgetting Weiss Ratings endorsement.

It is streams of good news. Not only is Tron increasingly becoming popular, but their dApps dominate. According to data from DappRadar, five out the top 10 applications run off Tron blockchain. In a space where Ethereum is dominant, Tron is slowly making inroads.

First, it has to be the “Justin Sun Effect.” At only 28 years, he’s an influential figure in the space. Thanks to his promotion, many claim Tron is a marketing juggernaut—not a technology platform. Anyhow, everyone has their right to air views. Even so, Tron has the attention of Weiss Ratings.

We might give #TRON a hard time every now and then, but give credit where credit is due: The #TRX/USD pair is the most bullish looking chart of any top 10 project right now. The popularity of this project cannot be denied. #BTC #altcoins #bitcoin #crypto #cryptocurrency

The US firm is an independent ratings company. In their recent analysis, the firm said they are giving credit where it is due even though they have been giving Tron a hard time. They go on to say the TRX/USD chart is the most bullish in the top 10 and popular. 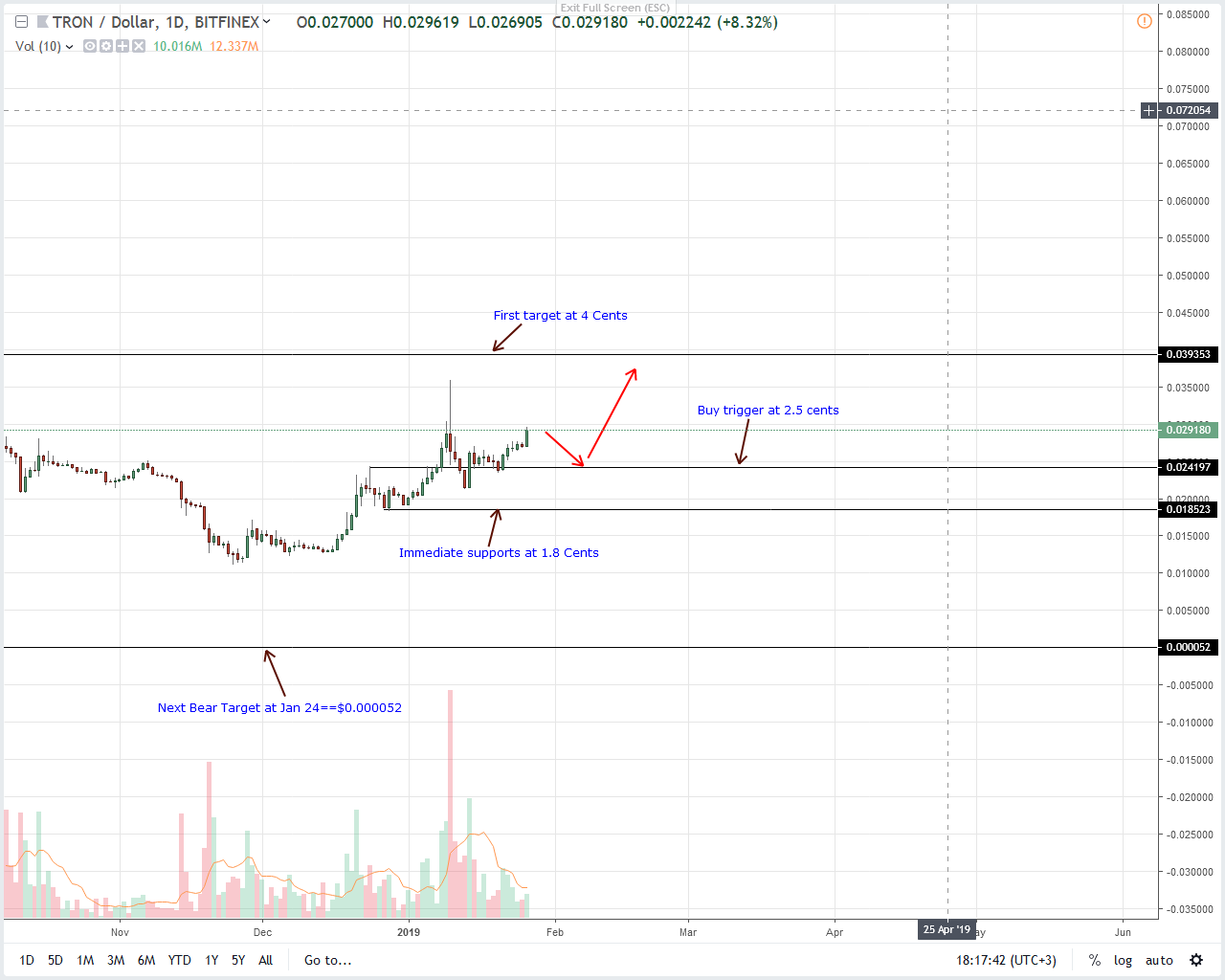 To quantify, TRX is up 16 percent against the USD in the last week. That’s not all. At the time of writing, the coin is up 6.8 percent from yesterday’s close meaning Weiss Rating observation is accurate. We expect this trend to continue in days ahead as demand for BTT pumps TRX prices.

TRX is indeed the top performer in the top 10, outperforming the likes of BTC and ETH. Since price action is on an upward trajectory, our previous TRX/USD trade plan is valid. In a bullish breakout pattern, we expect every dip in lower time frames to be a buying opportunity with first targets at 4 cents.

Suitable stops will be at 2.6 cents or Jan 25 lows—or the base of the lower time frame consolidation between Jan 24-25.

Aside from Jan 14 bull bar, Jan 21 is definitive as far as TRX price analysis is concerned. While we are net bullish, we also note that participation is reducing as total volumes drop from 50 million of Jan 14 to today’s average of 7 million. These averages are low and not representatives of the rapid price