After announcing a buyback plan, Justin Sun is confident TRX will dominate charts in July. In the same month, he will have lunch with Warren Buffet. At the time of writing, TRX is stable above 3.1 cents.

The smart contracting and the idea of asset tokenization is a gold mine. Undoubtedly, it opens doors for enterprising investors, melting borders. Through globalization, tokens of facilitating platforms will be on demand, receiving billions of dollars. As such, prices will spike.

It may be because of this that Justin Sun is buoyant of what’s ahead for TRX holders in July. In July, he will have lunch with Warren Buffet. Then, he may be lucky to convince a veteran billionaire investor to reconsider cryptocurrency.

There will be a media conference before and after the $4.5 million lunch. Selecting the three-Michelin starred restaurant that he says is historic, Justin Sun in a blog post further says:

“After narrowing the choices to three, I ultimately chose Quince because its food represents the traditional and the upstart — much like the participants in the lunch itself.”

However, it is far more than lunch. On June 25, the Tron Foundation announced at $20 million buyback plan. Through a blog post, the foundation said:

“..We will conduct by far the largest TRX buyback plan with the widest coverage in the secondary market, which will last for a year and will be conducted in several batches with no less than $20 million.” 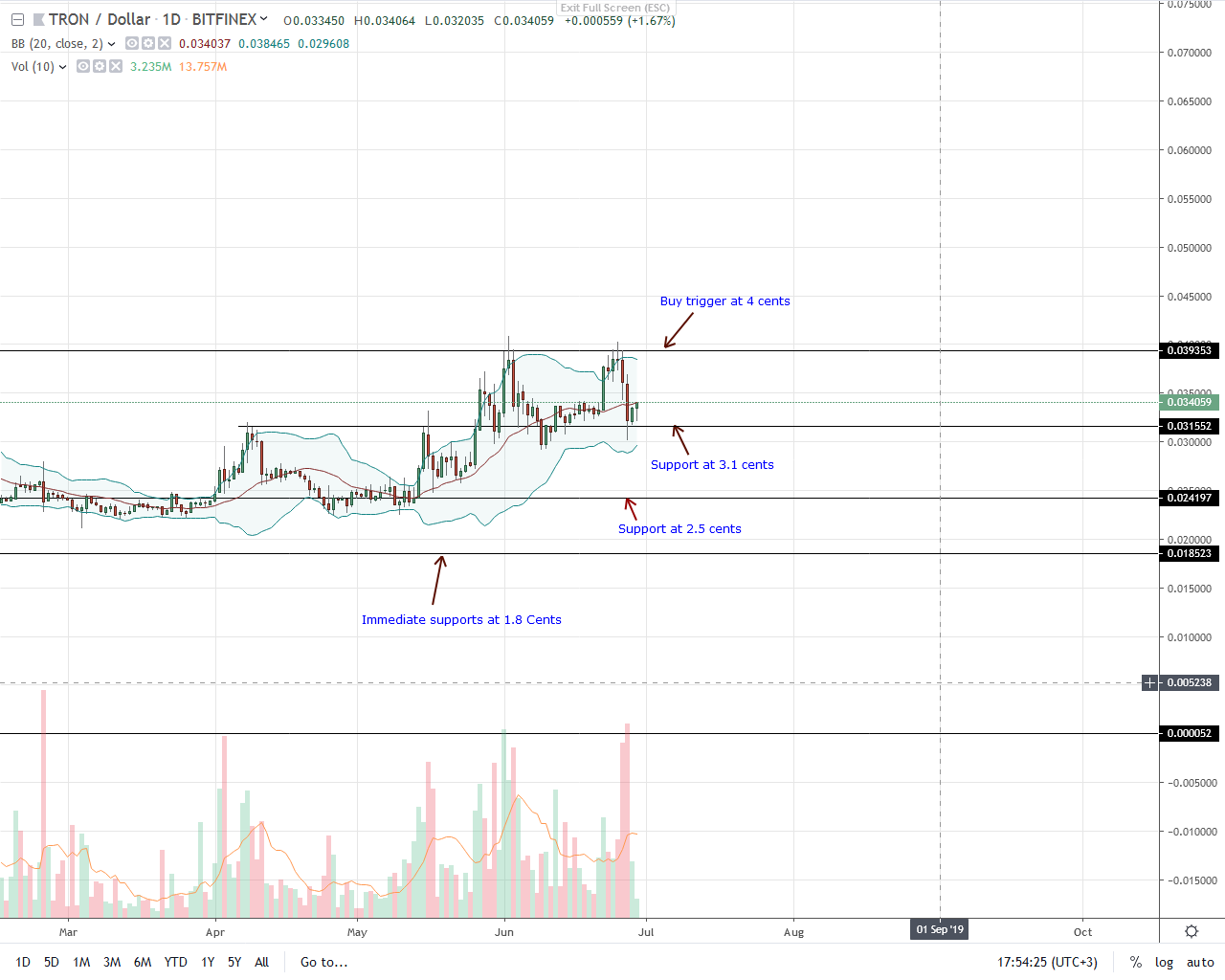 Even so, TRX prices are not responding as expected. Shadowed by the humongous bar of June 27 which was distinguished by a spike in sell trading volumes, TRX is mostly ranging against the USD.

Unless otherwise there is a convincing close above 4 cents complete with high trading volumes, TRX conservative traders are safe staying on the sidelines. However, risk-off traders can buy the dips as long as TRX is above 3.1 cents.

On the reverse side, any loss below this significant support could see TRX prices sliding to 2.5 cents or lower in days ahead. Otherwise, on the brighter side of the equation, if prices surge above 4 cents, triggering buys, a reasonable buy target will be 6 cents.

Wide-ranging, June 27 bear bar leads this trade plan. As a result, any surge above 4 cents should ideally be with high trading volumes surpassing 32 million of June 27.

Tags: Justin SunTRONTRXTRX BuyBackWarren Buffet
Tweet123Share216ShareSend
BitStarz Player Lands $2,459,124 Record Win! Could you be next big winner? Win up to $1,000,000 in One Spin at CryptoSlots