Will Cardano (ADA) Rally Above 9.5 Cents? Fireworks After Goguen

Goguen is Cardano’s development phase which tags along smart contracting. It will be independent, and despite delays in Shelly, developers can deploy it as Cardano edge closer to launch. Whether that will help lift prices, we don’t know, but so far Cardano (ADA) may drop to 6 cents.

Charles Hoskinson, the leader of Cardano’s technical/quality team and the person behind the architecture of the smart contracting platform, is indeed a visionary. He works on Cardano while concurrently contributing towards Ethereum Classic progress despite “deep chain” reorganization in Q1 2019.

Even so, that glitch isn’t slowing him and Cardano. After the successful conclusion of Byron, the focus now is on how best to decentralize Cardano in Shelly. Shelly being the second phase in a four-stage development concluding with Voltaire may be what CoinBase needs before listing the asset, exposing ADA to millions of customers across the US and Europe. However, it is Goguen that excites Charles Hoskinson.

In Goguen, the Cardano team will be “designing a next-generation virtual machine called IELE and a universal language framework to be used as the core infrastructure for future blockchain technologies. The proposed technology, which is based on formal methods and state-of-the-art programming language theory, will bring much greater security and dependability to blockchain systems and will reduce the risk of vulnerabilities.” Goguen brings smart contracting to Cardano.

Interestingly, its release is not sequentially dependent on Shelly’s completion as two different teams are working towards its actualization.  Besides, smart-contracting is independent of the state of the platform’s distribution or decentralization. 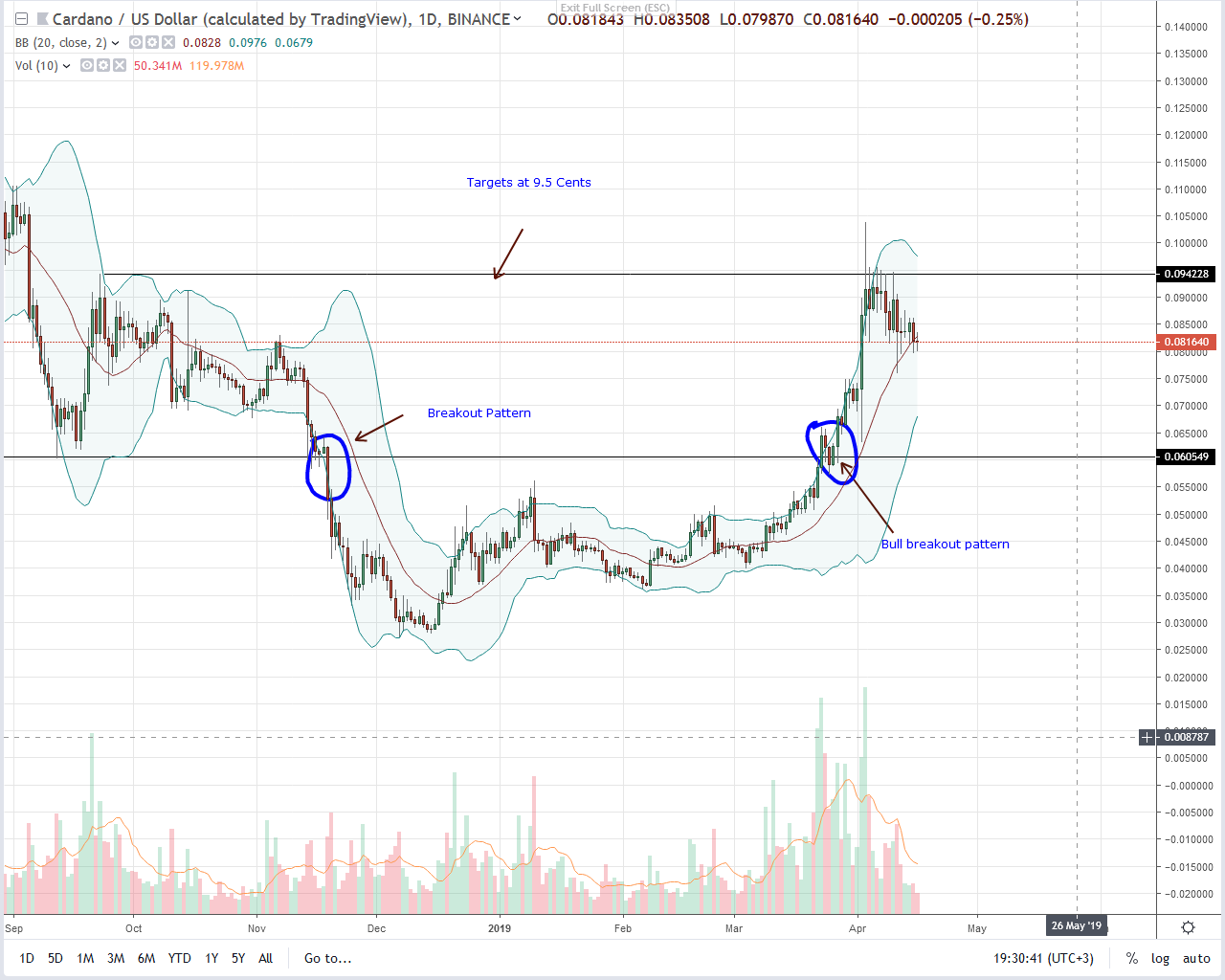 At eighth, Cardano (ADA) is down 2.2 percent in the last 24 hours but steady with a market cap of $2,566 million. All the same, the trend is bullish, and our previous trade conditions are valid. However, for proper trend continuation, there should be a clear cut close above 9.5 cents as buyers of Apr-2 come to live.

Notice that although bulls may be in charge and within a typical bullish breakout pattern, ADA is under pressure, correcting.

As prices slide, prices are retesting the middle BB, our flexible support line. Now, if this level doesn’t hold, then we may see ADA dropping to around 6 and 7 cents in a retest phase before buyers flow back.

Like above, ADA is technically bullish with prices shored by supportive fundamentals. In an effort versus result point of view, it appears that there is a chance for more upsides. However, for proper confirmation, movement above 9.5 cents or signaling support anywhere between 6 and 7 cents must be with high volumes exceeding averages of 126 million. It’s even better if it’s above 381 million of Apr-2.