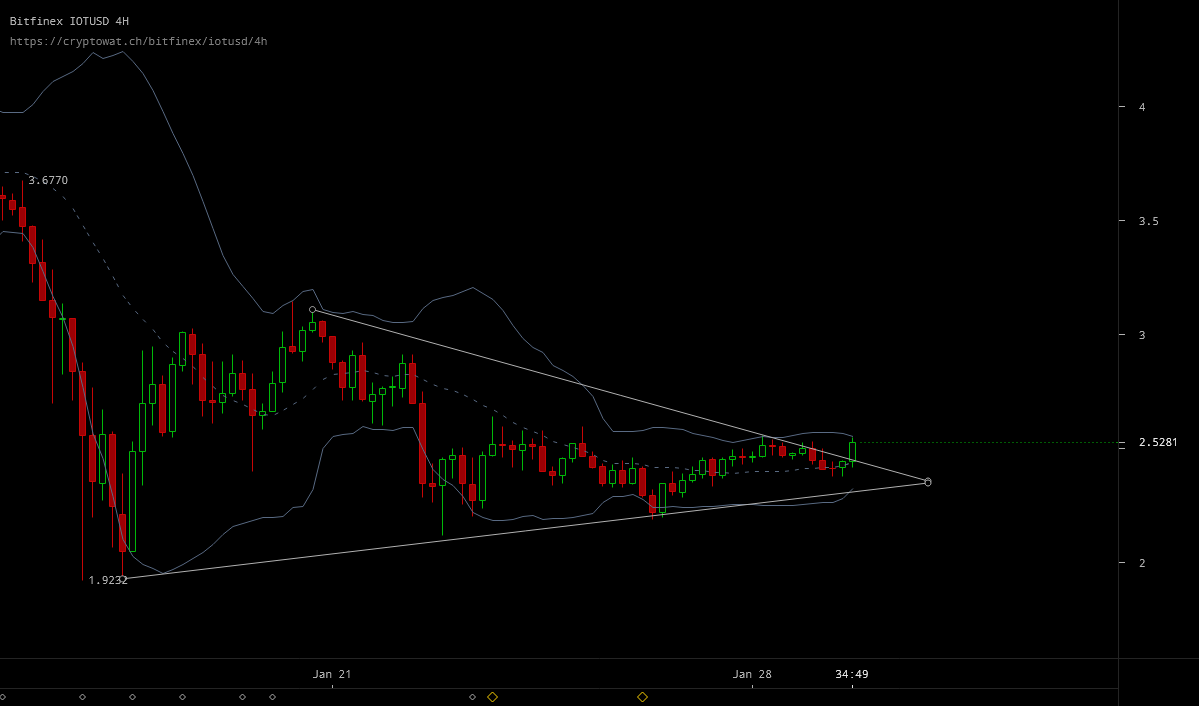 Besides NEO, which is now testing key resistance line in the 4HR chart, IOTA, EOS and LTC are trending lower.

Even though I expect LTC to find footing and gain bullish momentum, EOS looks likely to trend lower in the coming days as price action corrects a possible over-valuation following a close above the BB in the weekly chart by week ending January 21.

On the other hand, NEO might also slow down but considering the reaction at the middle BB on January 27, prices might actually close higher as buyers aim for $200.

This higher high as we can see in our entry chart is good news especially if you view price action from the daily chart.

While conservatives should steer clear until after price action break and close above $3, the 3-bar bull reversal pattern in the daily chart-which was formed a couple of days back and confirmed yesterday is a nice addition.

Realize that IOTA prices are inching higher and with this mid range break and close above the resistance trend line, scalpers can go long and aim at $3 in the coming sessions.

We can judge the strength of price action by looking at how prices are moving relative to the upper BB.

While we expect NEO bulls to find resistance at around the 38.2% on our entry chart, any close above that level will likely attract more bull pressure.

Odds are high that prices might close above $155 because NEO bulls actually bounced off the middle BB in the daily chart and are now trending higher as per trend.

If prices are to surge then, it is inevitable for prices to break above this 14 day accumulation whose upper limit is at $155.

Despite our long forecast yesterday, LTC didn’t find enough impetus to move higher following a break above the descending wedge on January 27.

However, this doesn’t mean that our long projection is now null and void. Since this is a break out, we shall be angling for long opportunities especially if buyers find support at previous resistance now support at around $170.

As it is, price action is actually flat even though it appears to be moving up, the range is pretty low and we can even see how the BB has been acting over the past few days.

There was a minor squeeze before that break above the wedge on January 28.

EOS Shorts with Bear Targets at $12

The spinning tops in the daily chart gave way to bears that in turn drove prices lower and close below the ascending wedge our entry chart.

So what’s our EOS game plan? Well, EOS is technically off the tops and is expensive. Price action need to correct this as it has been doing in many occasions.

I recommend shorts with immediate targets at $12.