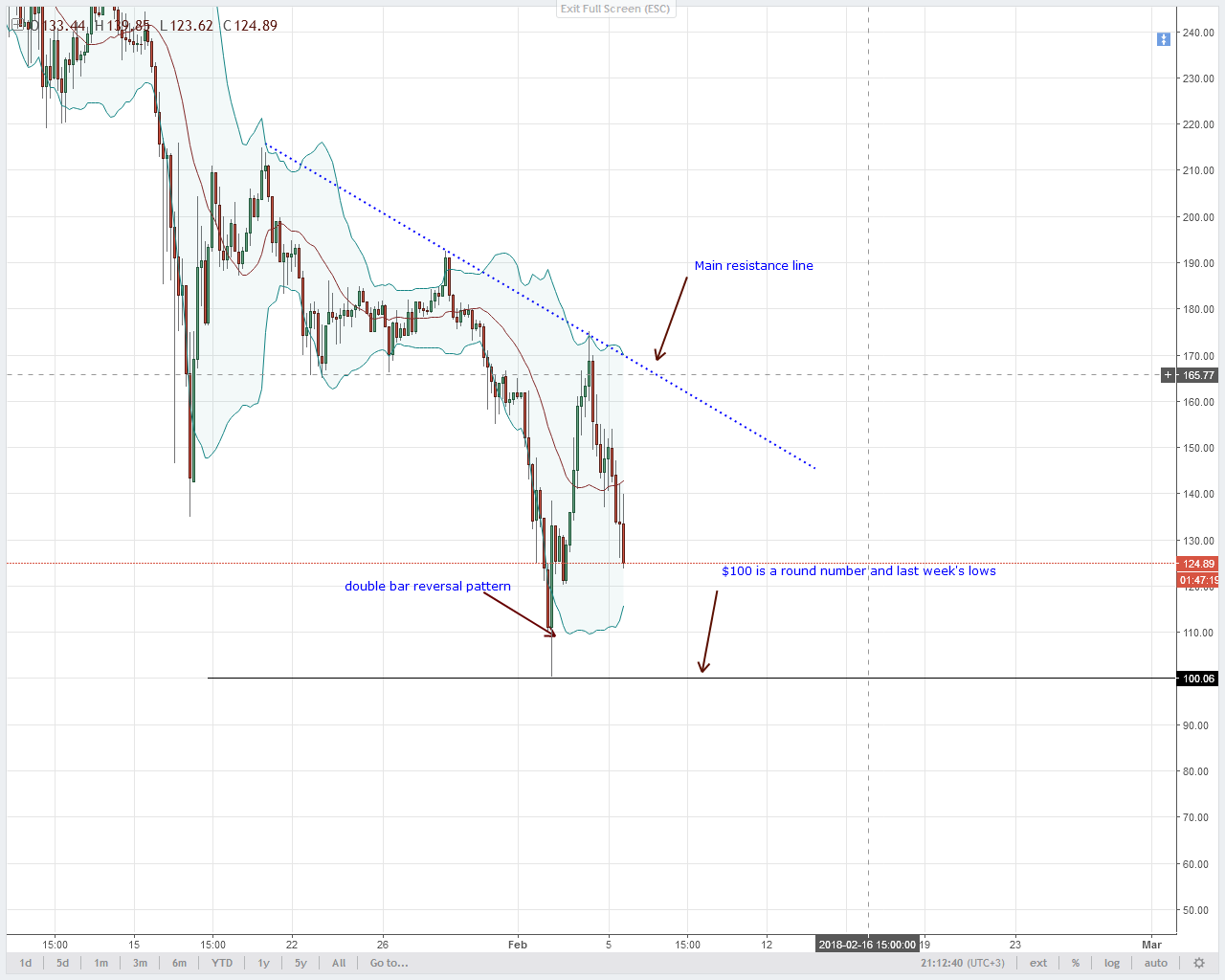 Besides LTC, Lumens and NEM, EOS and NEO are at key support levels. While we expect this bear surge to continue, price action will now rely on fundamentals if support is needed.

Already we have confirmation from Charlie Lee that LitePay and LitePal are on the way while South Korea and China are discussing on ways of introducing fair legislation to prevent over-speculation.

The bad days continue and while there are chances of XLM even trending lower, we can at least be encourage of fundamentals streaming it.

Yes of course this token has got more potential in cross border payment and if it adopted by household as the founders say then prices might find support.

At the moment, $0.31 triple bottoms looks to be promising but if in case sellers push harder, then it’s another level down as prices move closer to $0.20 or the 78.6% retracement in the daily chart.

In fact, that’s the ball park depreciation rate we are seeing in most alt coins and we cannot brush that off.

Technically, despite pockets of buy pressure towards the end of last week, NEM is still in a downtrend. After the heist and the subsequent compensation, NEM isn’t finding any support.

Fact is, in the weekly chart, the middle BB-the ultimate support line was broken after last week’s bearish engulfing candlestick and there is more.

A single glance at price action and bears seem to be aiming at $0.35 which happens to be August highs and a main break out level to complete a potential second phase of a huge bullish break out pattern-the retest.

These are potentials and it can be a quick reality now that most exchanges don’t allow deposit or withdrawals in XEM following that CoinCheck heist.

Besides that protective measure, NEM protocol is also tracking all funds courtesy of their tagging system.

Every higher high is a new selling opportunity for EOS bears but better still, the faster prices trickle lower, the better it is for hoarders looking to ramp up their long positions.

From the charts, we can see that prices are now testing $7.5 or the 61.8% Fibonacci retracement level and well below the 1st Fibonacci extension level in the weekly chart.

Chances are sellers might continue to step up and even test July 2017 highs of around $5.4 or the middle BB in the coming sessions and that is where we might starting picking out buy signals.

Before then, there seems to be more opportunities with sells than longs and therefore the best way to trade is to go with the trend.

LTC prices did appreciate and from a technical point of view, sellers are relentless and driving prices lower.

While we can remain confident that prices might find support at the psychological round number at $100, we shall have to wait and see if the recent announcement by Charlie Lee will shore prices.

According to him, two new payment systems-LitePay and LitePal are due to be launched this month.

Will adoption of LTC by merchants help spur and perhaps reverse this strong bear momentum? Let’s wait and see but in the meantime, any confirmation of last week’s bear pressure and strong close below $100 will effectively usher in a new wave of sell pressure.

Relative to other alt coins, NEO was a tad bit over-valued but as it is, prices are somehow at par with others.

In my opinion, I think prices might move lower now following yesterday’s close below $85. Ultimate support stands at $50.

Anyhow, fundamentals are not that bad. Should we get clear policy from China and South Korea, I really think NEO will lift off.