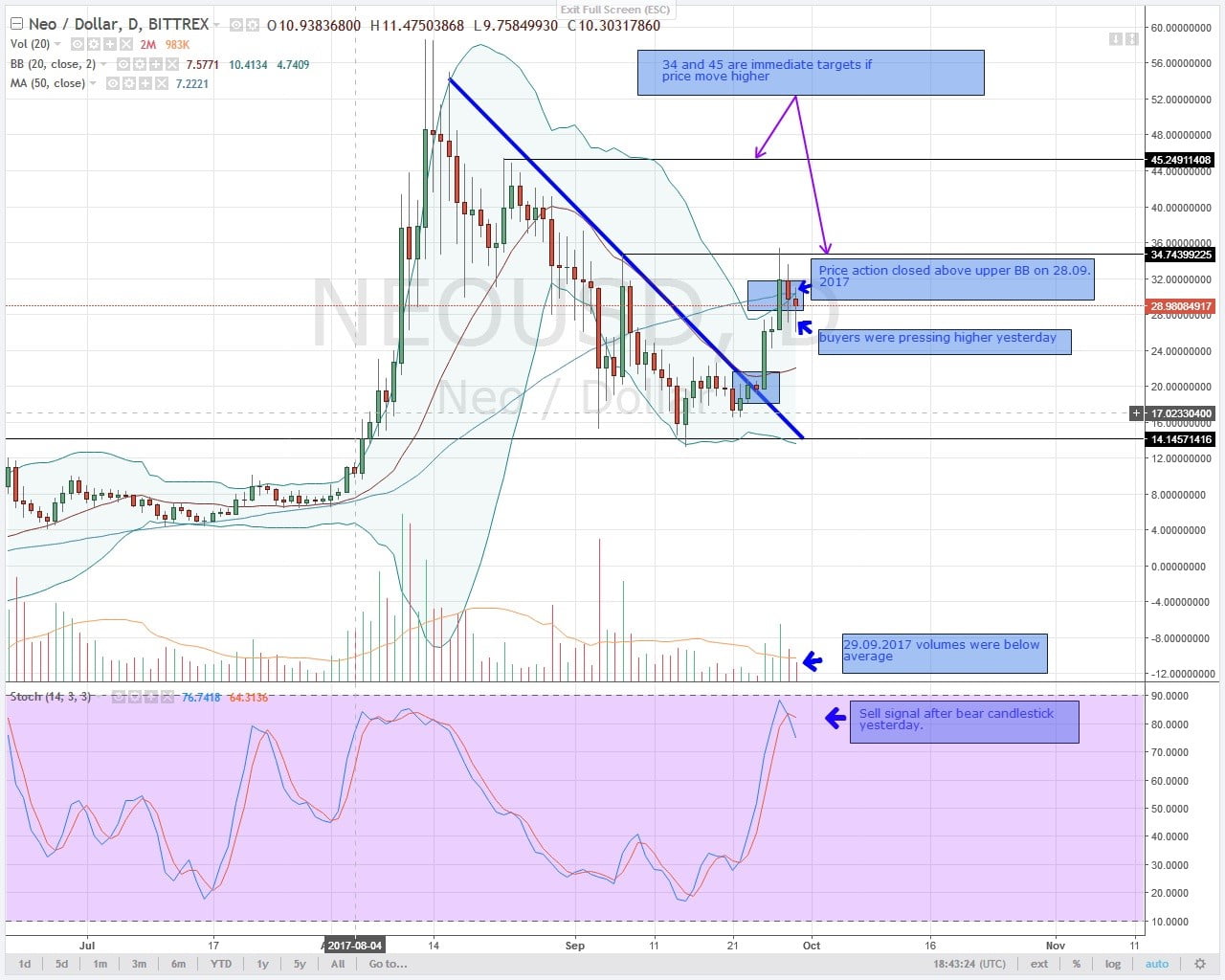 It is becoming apparent that price couldn’t climb higher past the immediate ceiling at $35. After what appeared to be a perfect breakout trade on 27.09.2017, volumes are dwindling and prices are dipping with some signals indicating that this was indeed a fake breakout. To start with, we can refer to BB-price action relationship. As a technical indicator used to measure volatility, price action points to overextension on the upside because 28.09.2017 candlestick closed above the upper BB at $29.75. The accompanying sell signal stochastics and the failure to close above the flexible 20-period MA resistance line points to further price dump going forward after 29.09.2017 closed as a bear. Refer image (above) – Figure 1: NEOUSD-Daily Chart-30.09.2017

At $313, DASH tested and broke below minor support level accompanied by below average volumes and a stochastics sell signal. Stochastics were initially mixed as price action was stuck within the resistance and minor support trend line after 18.09.2017. After yesterday’s bear candlestick, sellers drew first blood as prices continued to make lower highs in relation to the upper BB and seems to be headed straight to the 50 period MA and the middle band. These two technical levels also form a confluence with the minor support line and if today’s candle breaks AND closes below $320-below minor support trend line, then that will be a breakout and a sell trade initiation on Sunday. Sellers’ first target should be minor support at $270 and then around $220 which is resistance turned support Q2 2017 highs.

Yesterday’s forecast remains unchanged for this pair. Despite a dip from yesterday’s highs and prices still contained within 28.09.2017 Hi-Lo at $0.61 and $0.52, candlestick characteristics still show a push higher by buyers. In fact, there is a clear rejection at $0.53 which is also the 50-period MA-level and bulls became active as volumes and momentum show. At 20M, volumes were lower yesterday when compared to Thursday’s 27M against 28M average and if that push is sustained today, out bull targets will remain unchanged at $0.63 and $0.76 respectively.

Resistance level at $107 looks like a mirage for buyers. After 27.09.2017 resistance break up, this should be the case and right now price is finding traction and rejecting any activity above 105. After 28.09.2017 highs of 105, price action trended lower on 29.09.2017 with highs of $100 but sunk $5 deeper as it tested resistance turned support trend line at around $89. We can be inclined to think that prices might rise further as shown by stochastics but then again the main drivers-the participants as shown by volumes-are dwindling from 27.09.2017 highs of 64K to yesterday’s 47K. Both numbers are below 73K average recorded over the last 20 trading days and today’s volume spike with price movement higher or lower should determine whether buyers or sellers are in charge.

Tags: altcoinDashNEMneousdXMR
Tweet123Share196ShareSend
BitStarz Player Lands $2,459,124 Record Win! Could you be next big winner? Win up to $1,000,000 in One Spin at CryptoSlots