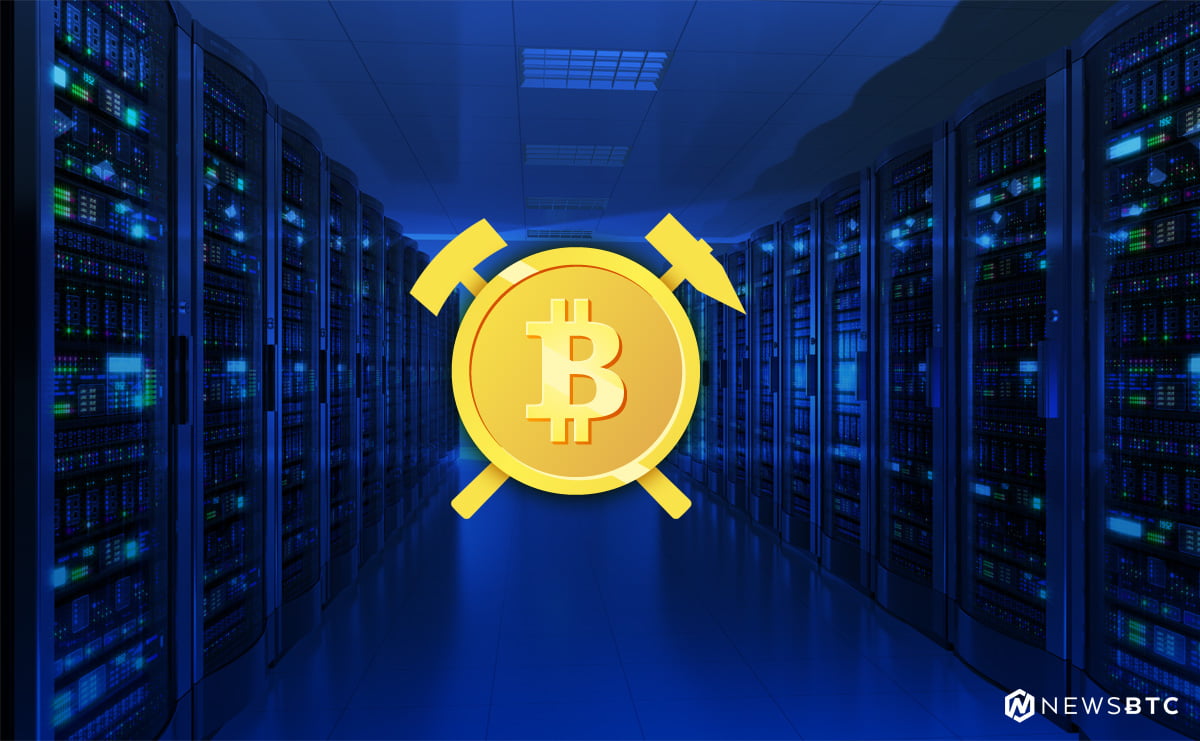 BTC Declined by 30% Five Times in 2017, Recent Correction is Tolerable

As CNBC Africa’s CryptoTrader host and producer Ran Neuner noted, bitcoin declined by 30 percent on five different occasions in 2017. This month’s 20 percent correction in bitcoin is tolerable, given the major corrections it had experienced in the past 12 months. 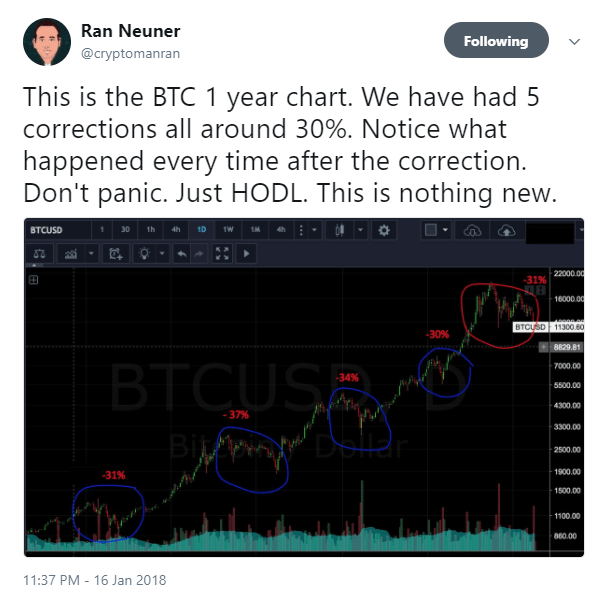 Other major cryptocurrencies such as Ethereum and Bitcoin Cash also recorded corrections in the 50 percent range last year, with the price of Ether, the native cryptocurrency of Ethereum, dropping from $360 to $130. Since then, Ether has surpassed $1,000, and surpassed $2,000 in the South Korean cryptocurrency exchange market.

Ethereum co-founders Vitalik Buterin and Charles Hoskinson expected a major correction to occur in the cryptocurrency market, because the market has grown at such a rapid rate within a short period of time. Blockchain projects with no products and users, solely with whitepapers with technobabble reached multi-billion dollar market caps.

Major corrections prevent short-term bubbles within the cryptocurrency market from occuring by shaking off weak hands and speculators. After major corrections, the market tends to solidify and strengthen, and initiate stronger rallies, as shown in the chart provided by prominent finance analyst Max Keiser below. 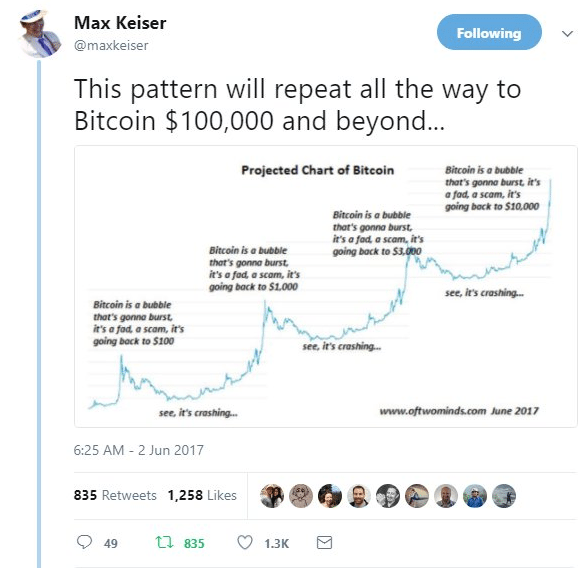 With initial coin offerings (ICOs) without products, users, and legitimate business models dominating the cryptocurrency sector, a major correction was long overdue. When the cryptocurrency market surpassed $500 billion in valuation for the first in history, Buterin questioned the justification of that valuation, and whether blockchains have done enough to support the billions of dollars invested in the market.

Where Does the Market Go Next?

The bitcoin market in particular is expected to have a strong year in 2018, given the entrance of institutional investors and retail traders. Several markets including India are also expected to regulate their bitcoin markets, introducing many millions of new users to the digital currency.

Constantin Papadimitriou, president of Pundi X, told QZ in an interview that approximately 10 percent of all bitcoin transactions take place in India. According to Pundi X, which focuses on offline cryptocurrency sales, surveyed 3,000 respondents across India, Indonesia, Japan, Russia, the UK, and the US, the demand for bitcoin India is stronger than ever, despite the government’s strong warnings against the cryptocurrency.

While it is unlikely the government of India will legalize and regulate its cryptocurrency market in the short-term, given that a task force has already been established, there is a higher probability than before that the government will regulate its bitcoin market.

With China, the world’s largest remittance market, having banned bitcoin, the next big market in terms of remittance and e-payments is India. The penetration of bitcoin into the Indian market would lead to a surge in the user activity of the digital currency.

Tags: bitcoin investmentbitcoin tradingbuy bitcoincryptocurrency trading
Tweet123Share196ShareSend
Win up to $1,000,000 in One Spin at CryptoSlots