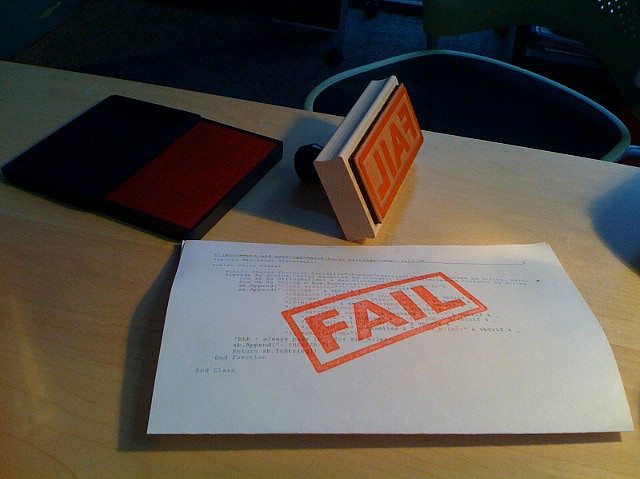 Is Bitcoin Failing, or We Failing Bitcoin? (Op-Ed)

Is Bitcoin failing as a new currency? It’s never said outright, but it is implied, inferred, or subject to innuendo. The rhetoric is coming from many of it’s earliest and most ardent supporters in the corporate world, but are they right? Are they just being impatient that it is not growing fast enough for the demands of their stockholders? Are they mismanaging their business plan, being dependent upon Bitcoin’s US dollar value? Do they have a point? Is Bitcoin itself the problem? Is Bitcoin failing, or are we failing Bitcoin?

First, let’s review the rhetoric, which has gained momentum over the second half of 2015. Uphold’s CEO, after the company rebranded from BitReserve, was dismissive on Bitcoin’s future as a currency to Business Insider. “I don’t think bitcoin is going to be anywhere near as important as people say it is today. That’s a personal view,” he said.

BitPay’s CEO Stephen Pair said at MoneyConf in June, “We keep adding merchants, we’re up to over 60,000 now, but they’re selling to the same pool of Bitcoin early adopters.” Recently, Taavet Hinrikus, the CEO of UK-based new peer-to-peer payments provider TransferWise, had some harsh words for Bitcoin this week at the London tech conference TechCrunch Disrupt.

“We’re very much a consumer-led company. The trouble with Bitcoin is nobody’s asking for it. I think the growth of Bitcoin has probably been driven mostly by greed, by people thinking ‘oh the value must, can only, go up.’ I think we’re kind of seeing that cool down now.”

Bitcoin greed? Considering the fact that Bitcoin itself does not have a public relations department or a global advertising firm behind it, it may be hard for Bitcoin to defend its business case to individuals minding their corporate business.

However, there are some facts that prove Bitcoin is steadily gaining momentum. It is consistently increasing its daily number of transactions, and the price has shown similar gains since it finally bottomed out after the Mt. Gox collapse in mid-January. The price has more than doubled since that low point, so Bitcoin itself is not showing any real signs of market weakness as we head into 2016.

That Bitcoin’s currency is not catching on with the mainstream as fast as some would like may be a fair dig, but where does the fault lie there? Compared to the Internet of twenty years ago, Bitcoin is still at the developmental stage where you have to enter IP addresses to communicate. Its real-world functionality could be better. So could its public image, which is getting a constant negative vibe through mainstream media outlets. Clearly, the Bitcoin community is not doing enough to get the word out, whether it is these corporations that make their profits from its advances, or the users, like you and I.

Each of us can help spread the word by crafting something known as an “elevator pitch.” When something good happens to Bitcoin, start a conversation with a couple of people you know. Invariably, they’ll ask “What is Bitcoin again?” or “How does Bitcoin work?” This is your cue to give them your “elevator pitch,” which means in the time it takes to stand on a trip in an elevator with someone, tell them a positive insight into what you’re doing and why you’re doing it. Here is what I say when I run into someone who wants to learn more, on a surface level, about Bitcoin:

Let’s say I ran into “Joe,” and we start talking, and I mention things are going well in my Bitcoin investments, with values passing over $400. He asks, “How does that Bitcoin thing work again?”, and you say something like this:

“Well, Joe, imagine sending unlimited money, anywhere in the world, for free, with your smartphone. Imagine an investment that was worth a nickel five years ago and is now worth over $400 USD. Imagine a way to buy plane tickets, a cup of coffee, or a Tesla electric car without a bank fee, or risk of identity theft. What if you were your own bank, Joe? Wouldn’t your life be better? That is ‘The Future of Money.’ That is Bitcoin.”

Then, refer them to a wallet company that you trust to get started with, or email them some of your favorite Bitcoin links or videos, depending on how the pitch went.

Bitcoin is a technology, nothing more. It needs an introduction to the masses to attract the masses. “Preaching to the choir” and helping people who own it use it better is fine, but people need to be shown how effective it is outside of market price indices and mainstream media spins. Just like with the Internet in the 90s, Bitcoin will grow based upon word-of-mouth advertising, the most effective advertising in the history of the world. Those that complain need to do more to share Bitcoin’s wealth, both of value and useful features.

It’s up to you, me, and the titans of Bitcoin industry to spend just as much time sharing Bitcoin as we do watch its price. With social media, smartphones, email, and a variety of other ways to connect, we have no excuses. We can all do better. So find two special people and get them Bitcoin and a wallet for Christmas. It’s the least each of us can do for your loved ones, and for Bitcoin, this Christmas.

Tags: accept Bitcoinbitcoin failingbitpayUphold
TweetShare
BitStarz Player Lands $2,459,124 Record Win! Could you be next big winner? Win up to $1,000,000 in One Spin at CryptoSlots