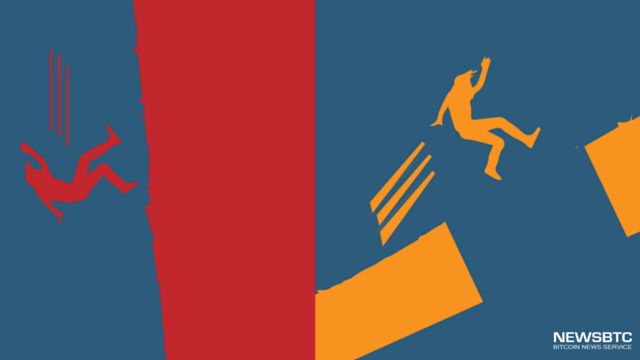 Bitcoin Price Down; 400 or Recovery?

It’s been about 36 hours since we published our last intraday analysis, and we’ve had a lot of action across the period. In yesterday’s analysis, we suggested that the bitcoin price was – for want of a better phrase – coiling up and in doing so getting ready to spring in one direction. We noted that it was impossible to tell with any certainty just what that direction would be, but the rules of both our intrarange and our breakout strategy afford us the luxury of not having to form a bias if we don’t have any firm indication, and still being able to draw a profit on any volatility. As things turned out, the bears took control overnight, and we broke to the downside. We ran clean through the level we had slated as in term support and, without so much as a brief consolidation, hit our downside target for a nice quick profit on the move. As such, our upside levels (the ones we defined yesterday) become invalid, and we must set up some fresh parameters for today’s session.

One thing it’s worth noting before we get started with our definitions – we are heading into what could be a pretty volatile weekend. The holiday suppression is well behind us now, and as we saw last night, if traders in a particular direction get a hold of the market, the bitcoin price can shift considerably in a very short period of time. With the open of the Asian session a little later on, and driven by the large volume out of China that we always see across the late Friday and early Saturday timeframes, we are expecting, and as such, braced for, an active session. How do we brace ourselves? Through tight risk management parameters, as always. SO, without further ado, let’s get to what matters and define some key levels. Take a quick look at the chart to get an idea of what we are watching.

The cahrt shows the downside momentum we have already discussed, with the bitcoin price breaking from around the 430 mark at approximately 1:30 am GMT, to carve out fresh lows at 405 flat a little earlier on this morning. These lows serve as support, so in term support sits at 405. To the upside, in term resistance comes in at a level the bitcoin price =corrected to after hitting lows; the most recent swing high at 412 flat. This seven-dollar gap defies today’s range.

We will go with the downside first. If we get a break, and a close, below in term support, it will put us in a short position towards an initial downside target of 400 flat. It’s a pretty tight trade this one, but we expect 400 to serve up some friction, so targeting below that level is a little too aggressive. Stop around 406.5.

Looking the other way, if we close above in term resistance it will give us an opportunity to go long towards an equally tight upside target of 418 flat. A stop on this one somewhere in the region of current levels – circa 410 – defines our risk.

Tags: bitcoinBitcoin chartbitcoin pricebitcoin profitbtcusdtrade bitcoin
Tweet123Share196ShareSend
Win up to $1,000,000 in One Spin at CryptoSlots