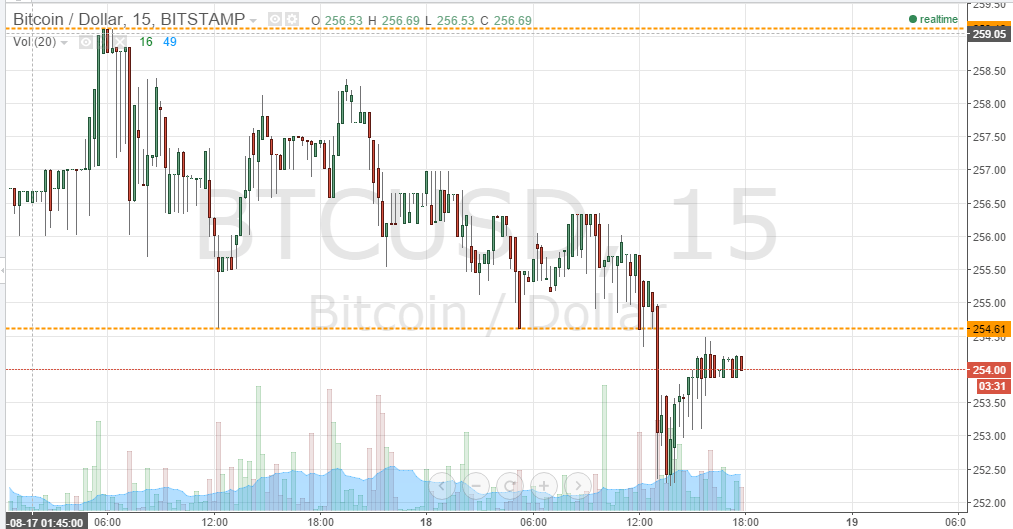 Earlier this morning in our twice-daily bitcoin price watch piece, we suggested that the overarching momentum in the bitcoin price throughout the first half of this week has been to the downside. Perhaps it is due to speculation from a fundamental perspective, or perhaps it’s just selling pressure that has arisen as a result of the sharp decline we saw over the weekend, but – whatever the reason – we explored the potential for further downside momentum throughout today’s European session. The European session has now closed the day, and as it turned out, we did get some bearish action in the bitcoin price around lunchtime GMT. However, we have since corrected from daily lows, and currently trade just shy of the level we had slated as in term support this morning. With this said, where are we looking at from a trade management perspective as we entere tonight’s Asian session, and where are we looking to get in or out of the markets according to our intraday strategies going forward? Take a quick look at the chart.

As you can see, during today’s session we broke through in term support at 254.61 to reach intraday lows just ahead of 252 flat. During tonight’s session, aforementioned broken in term support presents us with in term resistance, while 252.27 defines a tight range to give us our evening parameters.

If we can break back above what now serves as in term resistance at 254.61, it would validate a slightly longer-term upside target of 259.12. On this trade, a stop loss somewhere around 253 gives us plenty of room to return to trade within range without being chopped out on false action.

However, and bearing in mind recent action what is likely the more reasonable suggestion, we could easily see a break of in term support at 252.27 before the night is out. If we do, a short-term downside target of 252 flat, with a stop loss somewhere around 253.5, makes for a nice scalp bearish trade.