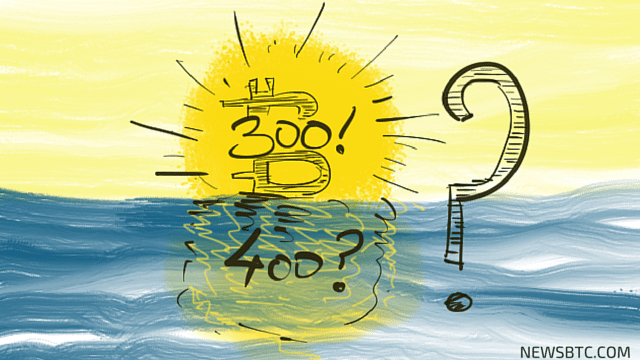 There is a lot of excitement right now as the Bitcoin price continues to rise. It has been slowly going up for some weeks now. Now that we’ve seen it break the $300 mark, there’s no way to know when will it top up or crash. The price has reached a range where the momentum of trust and investment is critical, and considering how the Bitcoin value is growing right now, we will easily reach $350.

Through 2015, Bitcoin’s price volatility decreased when compared to the previous years;  it has been “quiet” around the $250 mark. On July the 25th, the price went up to beat $315, but it was not able to hold the mark, and–after some dumps–we’ve seen it crash down to about $198 in September. After a close analysis, we can see that the floor price for this year was a minimum of about $154 in January. Since then, we have seen more than a 35% increase.

Since last Wednesday, the 28th of October, the price has been around the $300 mark and all points to the fact that we might see it coming to the $350 barrier. Bitcoin has remained around $250-270 for a while, now, and it is certain that this rise will trigger a lot of selling orders. Once that happens, the price might take a hit, however, there is a lot of optimism as many believe this price is here to stay.

Last Wednesday, the Bitcoin community woke up to see the price breaking the $300 barrier a second time this year. The price continued to rise, and today it already topped the $334 mark. Even though the market is suffering little dips, the price is still advancing, and pretty soon we could see it beat the $400 mark.

Many people say the price increase has to do with the recent European VAT ruling; however, we need to recognize that there is much more to it than just that. We could point out many reasons, but the most plausible is the fact that Bitcoin is gaining momentum.

With the Chinese exchanges leading the bitcoin trading volume, 2015 has seen multiple small peaks reaching just over the $300 barrier but quickly followed by considerable dumps. If the Bitcoin price manages to hold a strong position around the $300 mark this time, and the good news keeps on coming, we will probably see a slingshot making it go past $400 before the end of November.