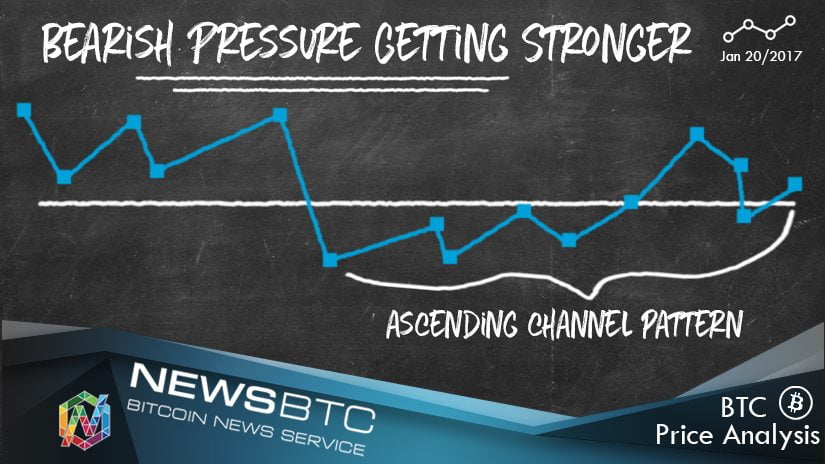 Bitcoin price is encountering a lot of roadblocks on its move up north for now so bears might take advantage and push for a drop.

The 100 SMA has just crossed above the longer-term 200 SMA to show a pickup in buying momentum. Also, the short-term moving average is close to the channel support, adding to its strength as a floor. However, looking further back shows that bitcoin price has been rejected on its test of the area of interest at $900-950, as the broken support appears to be holding as resistance.

Stochastic is heading south to confirm that bears are taking control of price action. RSI is also turning lower so bitcoin price might follow suit and trigger a break below the support at $900.

Investors are still reluctant to put more funds in bitcoin for the time being, as the Chinese government recently slapped more regulations on exchanges in the mainland. Leading bitcoin platforms OKCoin and Huobi have decided to stop offering margin and leveraged trading options to comply with restrictions that minimize the risks associated with bitcoin trading.

These state requirements stemmed from recent investigations by Chinese authorities in the Shanghai branch of PBOC along with Shanghai Financial Affairs Office and other government agencies, who concluded that margin and leveraged trading features could be disastrous for investors when juxtaposed with the volatile nature of the cryptocurrency.

Keep in mind that China is the largest market for bitcoin as investors have been pursuing higher returns and seeking to hedge against their yuan-denominated holdings. These restrictions could discourage further bitcoin activity and force more trader to unwind their long positions.