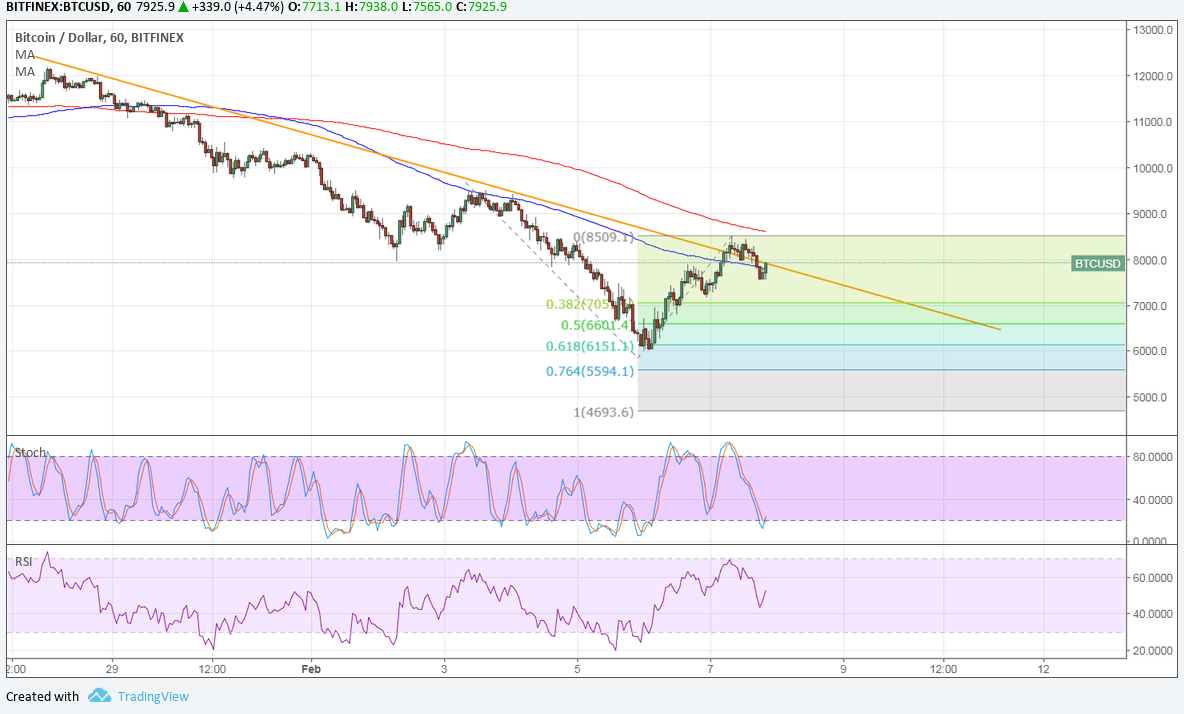 BTC Price Tech Analysis for 02/08/18 – Prepping for Another Leg Lower?

Bitcoin price has been climbing over the past couple of days but is hitting a short-term upside roadblock that could let the selloff resume.

The 100 SMA is below the longer-term 200 SMA so the path of least resistance is to the downside. This means that the downtrend is more likely to resume than to reverse.

Aside from that, the 100 SMA lines up with the descending trend line to add to its strength as resistance. A larger pullback could also hit the ceiling at the 200 SMA dynamic inflection point.

Stochastic is dipping into oversold territory, though, which means that buying pressure could still kick in and lead to a strong break past the trend line and moving averages. In that case, an uptrend could ensue until the longer-term upside barriers.

However, RSI is still on the move down, which means that there is still quite some bearish momentum left. In that case, bitcoin price could fall to the 38.2% extension around $7,000 or the swing low at the 61.8% extension. The full extension is located at $4,693.60. The US dollar drew some demand in the latter trading sessions, leading BTCUSD to pause from its previous rallies. By the looks of it, bitcoin price is moving in tandem with higher-yielding risky assets like stocks and commodities, which is a different dynamic than in the past.

Several market analysts say that the selloff is already overdone and it may be time for the longer-term uptrend to resume or for bitcoin price to at least show a correction from the drop. Apart from that, news that a Senate Banking Committee hearing on cryptocurrencies emphasized consumer protection without a heavy-handed ban on development led to some relief.