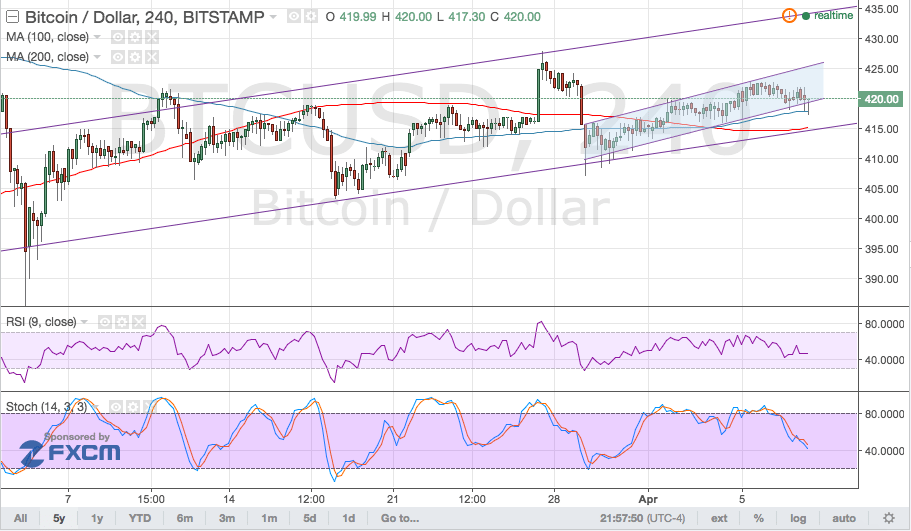 Bitcoin price might be able to test the 4-hour channel bottom if the short-term support breaks down.

Bitcoin price is currently stalling at the 100 SMA, which might hold as a dynamic support level. Speaking of moving averages, the 100 SMA is still above the longer-term 200 SMA so the path of least resistance is to the upside and the uptrend could resume at some point.

Meanwhile, the 200 SMA lines up with the bottom of the 4-hour channel support and could also hold as the line in the sand for any rallies. A break below this area could set off a downtrend.

RSI is treading sideways, barely providing any strong directional clues. Stochastic is on the way down, indicating that sellers are in control of price action for now and that further losses are possible.

Risk aversion came back in the financial markets yesterday, spurred by a combination of intervention chatter and talks of larger easing efforts from the ECB. Japanese officials warned that they’re monitoring yen FX levels closely and that the appreciation might have negative repercussions on the economy. The ECB minutes revealed that policymakers considered larger rate cuts in their March meeting and Governor Draghi reiterated that they’re ready to do whatever it takes to stimulate growth.

Fed Chairperson Yellen reassured that asset prices are not overvalued in the US and that there is no economic bubble that’s about to burst, giving the dollar additional support against its rivals, including bitcoin price.