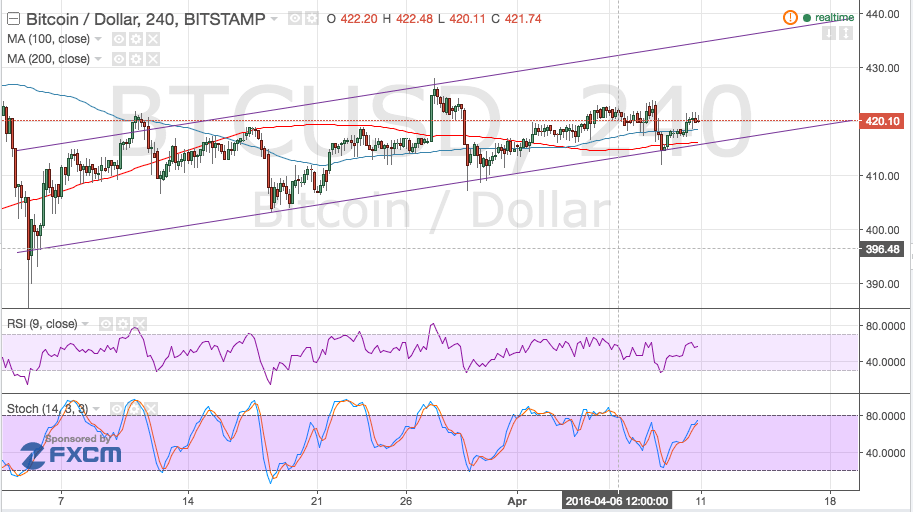 Bitcoin price is still in an uptrend, as the ascending channel support on the 4-hour time frame is holding.

The 100 SMA is above the 200 SMA so the path of least resistance is still to the upside. This means that bitcoin price could be able to climb back to the top of the range near the $430 level or much higher. However, if a downward crossover is seen, sellers may take over and push for a break below the channel support at $415.

RSI is still on middle ground, barely providing strong directional clues for now. Stochastic is heading north so price could follow suit. This indicates that bullish momentum is present, but it might fade once the oscillator reaches the overbought levels.

Last week was marked by a lot of consolidation for bitcoin, although some volatility was seen during the latter half. Risk sentiment played a role in price action, as demand for the dollar strengthened on increased financial uncertainty.

However, bitcoin price could still be able to carry on with its climb, especially since futures and commodities appear to be indicating a return in risk appetite early on this week. Data from China came in mixed, with the headline CPI failing to budge from 2.3% but the PPI showed a significant improvement from -4.9% to -4.3%.

Later on, US retail sales and CPI readings could add to dollar volatility once more. Other factors that could affect market sentiment and bitcoin price action for the rest of the week include the central bank statements from Canada and the UK, as well as the UK CPI and Australian jobs release. Updates on oil production meetings could count as well.