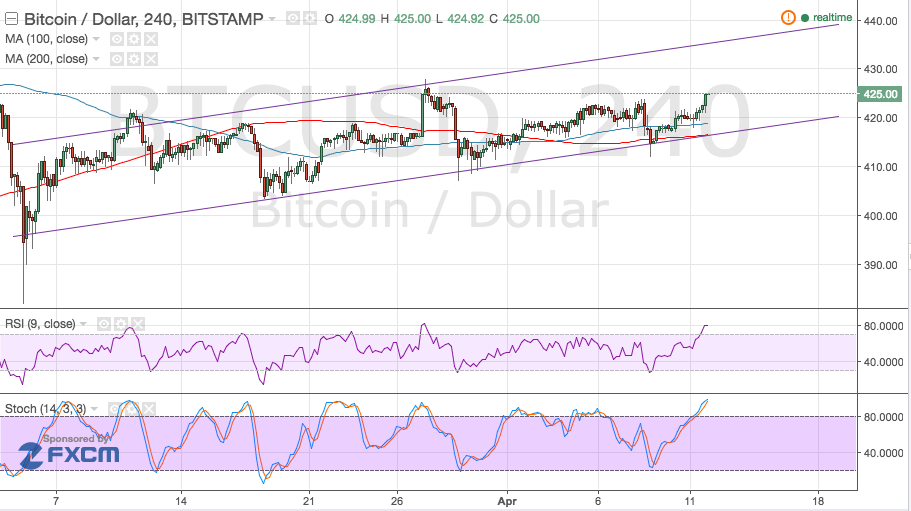 Bitcoin price is gaining more traction on its climb, putting it back on track towards testing the channel resistance.

As mentioned in the previous update, the moving averages added strength to the support at the bottom of the channel near $415. In addition, the 100 SMA is above the longer-term 200 SMA so the path of least resistance is still to the upside and the uptrend is likely to carry on.

Right now, bitcoin price is encountering a bit of resistance at the mid-channel area of interest at $425. A break past this level could allow it to set its sights on the range resistance but if the current levels keep gains in check, price could make another test of support at $420.

RSI is already indicating overbought conditions, although the oscillator hasn’t crossed down yet. Similarly, stochastic is in the overbought level but has yet to turn lower, which means that buying pressure might start to weaken from here.

Catalysts for this week include the central bank statements from the UK and Canada, as well as retail sales and CPI data from the US. So far, traders have been moving away from the US dollar on increased uncertainties, especially since the Fed had a special closed meeting under “expedited purposes” yesterday and Chairperson Yellen has been in talks with President Obama and VP Biden.

Weaker than expected US data could further dampen demand for the dollar, allowing bitcoin price to advance in the process. In addition, positive trends for commodities could increase risk appetite, which would also benefit bitcoin.

Tags: bitcoin signalsbitcoin technical analysisbtcusd pricebtcusd trade
TweetShare
BitStarz Player Lands $2,459,124 Record Win! Could you be next big winner? Win up to $1,000,000 in One Spin at CryptoSlots