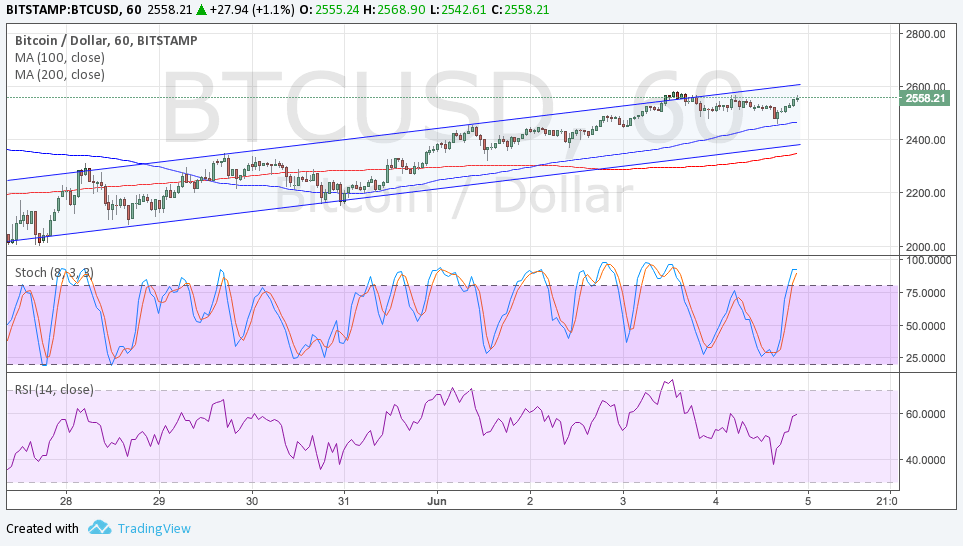 Bitcoin price is steadily climbing in its ascending channel formation, possibly even looking to make an upside breakout and steeper rally.

The 100 SMA is above the longer-term 200 SMA so the path of least resistance is to the upside. The gap between the moving averages is widening to reflect strengthening buying pressure.

Also, the 100 SMA recently held as dynamic support while the 200 SMA coincides with the channel bottom near 2400, adding to its strength as a potential floor.

Stochastic is pointing up to signal that bulls are on top of their game. Similarly RSI is on the move up so bitcoin price might follow suit. However, stochastic is already nearing the overbought zone to indicate rally exhaustion, possibly drawing sellers to the mix and leading to a larger correction from the uptrend.

Dollar weakness was in play on Friday after the NFP release and bitcoin price was able to take advantage. The NFP report printed a smaller than expected rise in hiring and a downgrade in the previous release, leading traders to doubt that a June rate hike is underway.

Keep in mind that the Fed has been confident about employment prospects so this setback could lead them to reevaluate their stance. Still, the unemployment rate improved to 4.3% while average earnings came in line with estimates of a 0.2% uptick.

Political uncertainty surrounding the upcoming UK snap elections and the recent terror attacks in London are also shoring up demand for the cryptocurrency as investors seek higher returns and diversify their holdings out of traditional financial markets.