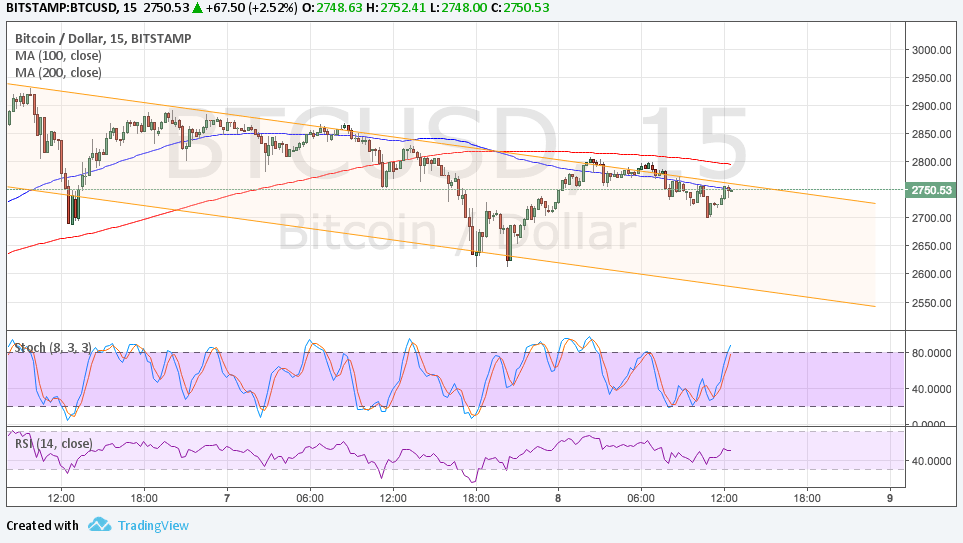 Bitcoin price could be starting a new downtrend as bears wrestle to regain control and push for a break below an area of interest.

The 100 SMA is below the longer-term 200 SMA on this time frame so the path of least resistance is to the downside. Also, the 100 SMA lines up with the channel resistance, adding to its strength as a ceiling. A quick pop higher could still find resistance at the 200 SMA dynamic inflection point at $2800.

Stochastic is on the move up to show that there’s still some bullish pressure left but the oscillator is nearing the overbought zone to reflect rally exhaustion. If buyers book profits around these levels, a dip back to the channel support at $2550 could be underway.

RSI is treading sideways to suggest that further consolidation could be underway. As highlighted in previous articles, bitcoin price is sitting right on an area of interest at a rising trend line and former resistance zone.

Traders seem to be reestablishing their long dollar positions now that former FBI director Comey’s testimony did not contain any bombshell evidence to indicate that Trump obstructed justice or provided highly-classified information to Russian officials.

With that, risk appetite appears to be crawling back in the markets and this tends to be bearish for bitcoin price as investors move funds back to equities and commodities.

Also in the UK, elections are underway and early polls are indicating that the Conservatives could maintain their lead and avoid a hung parliament situation. This could strengthen their negotiating front during Brexit talks and lead to more political stability in the country, resulting to a potential relief rally in risk assets.