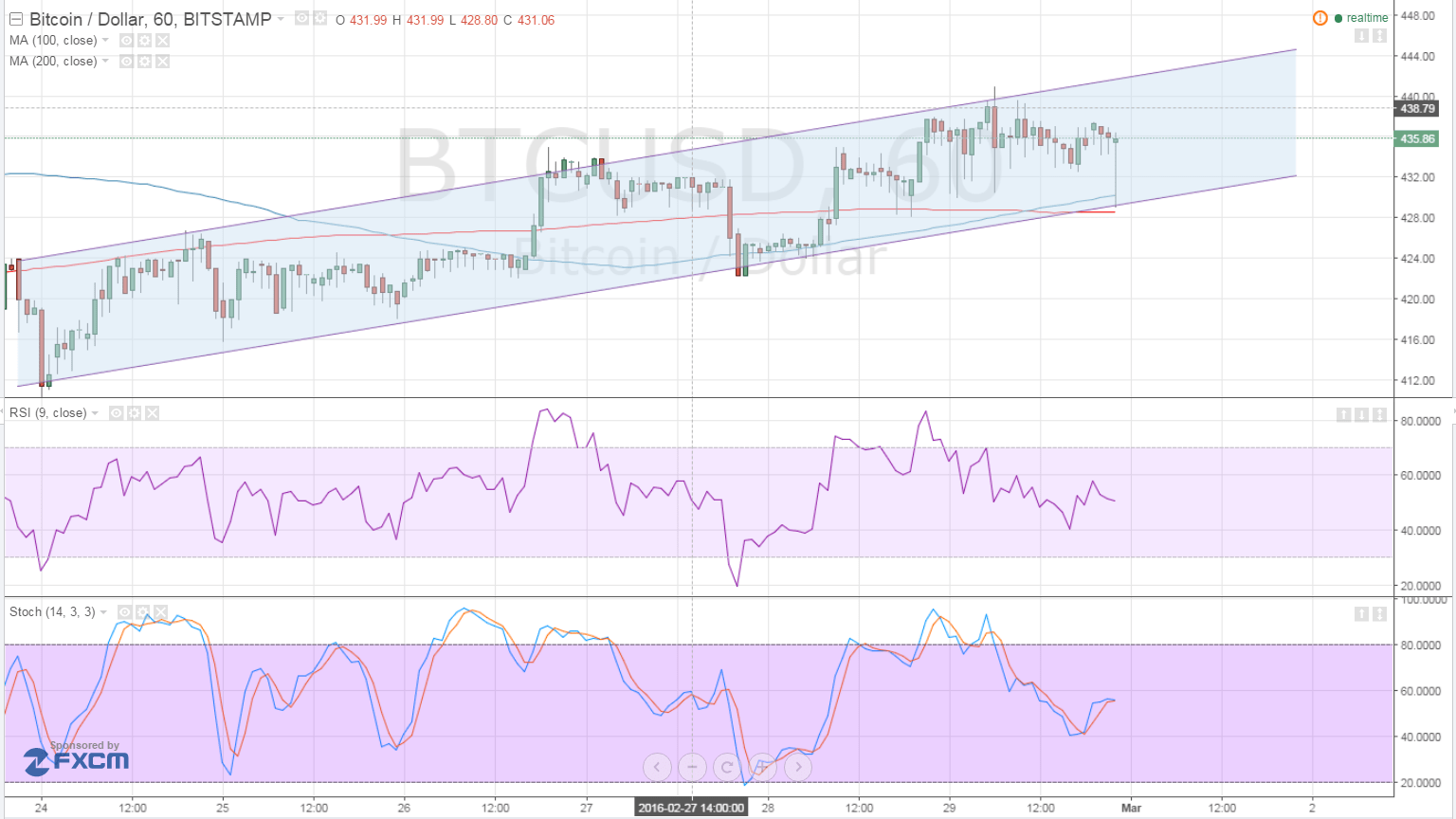 Bitcoin price bounced off the channel support as expected and might have its sights set on the top.

The 100 SMA just crossed above the 200 SMA, confirming that the uptrend is likely to carry on. In addition, these moving averages held as near-term support levels since they line up with the channel support around $430.

That long-wicked candle suggests that buyers are refusing to let bitcoin price drop too much, as long orders were probably located right around the bottom of the channel. These bulls might keep these long positions open until they can book profits at the channel resistance.

For now, stochastic and RSI are both on middle ground coming from their way down from the overbought levels. However, stochastic appears to be turning higher, suggesting that buyers are regaining control. A move back south could draw price to follow suit, leading to yet another test of the channel support.

A break below the $430 area could show that a reversal is starting, likely taking bitcoin price to the next support around $420 then onto the $400 handle.

Data from the US economy came in mostly weaker than expected yesterday, as pending home sales data and the Chicago PMI fell short, allowing BTCUSD to advance. For today, the ISM manufacturing PMI is up for release and a rise from 48.2 to 48.5 is expected, with stronger than expected data likely to spur dollar gains.

Earlier today, Chinese PMI readings came in below expectations for both the manufacturing and non-manufacturing sectors, keeping risk appetite weak. The official manufacturing PMI fell from 49.4 to 49.0 while the non-manufacturing PMI slid from 53.5 to 52.7 to indicate a slower pace of growth. Soon after, Australian GDP forecasts were revised down but the RBA decided to keep interest rates unchanged as expected.

Should risk aversion stay in the markets for the rest of the trading sessions, bitcoin price might be forced to return its recent gains. Bear in mind that euro zone CPI estimates came in below expectations yesterday so European traders are wary of putting funds in riskier assets and might move these over to the safe-haven US dollar.

Other catalysts for the week include the US NFP report as this might revive Fed rate hike expectations for the month, thereby driving up demand for the dollar against bitcoin price. Leading labor indicators such as the jobs component of the ISM surveys and the ADP non-farm employment change figure could set the tone for dollar action for the rest of the week.