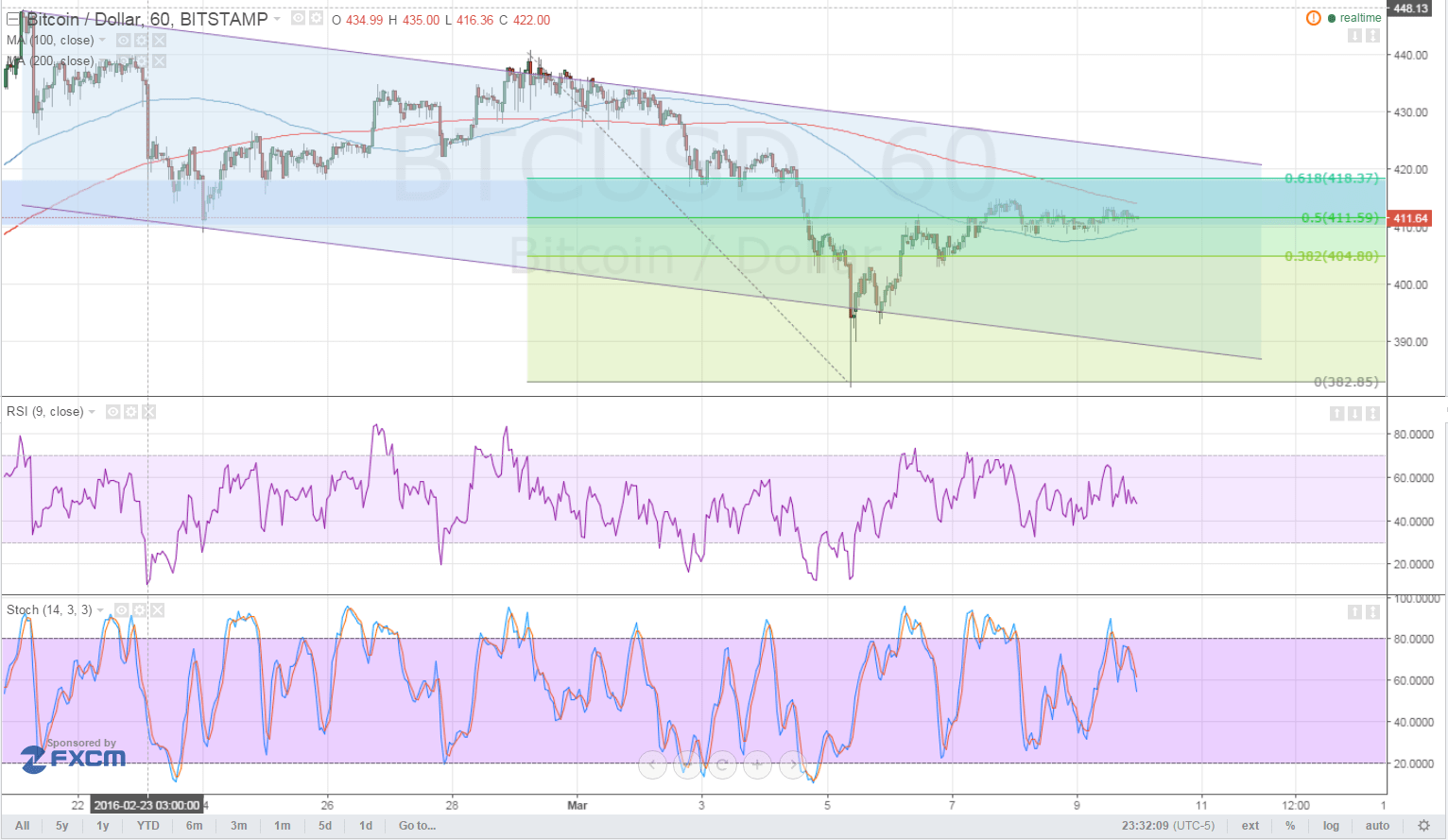 Bitcoin price has barely moved from its range as traders reduce their exposure to event risks, but strong breakouts could still encounter nearby support and resistance.

The 100 SMA is below the 200 SMA so the path of least resistance is still to the downside. However, the short-term moving average is inching closer to the longer-term SMA so an upward crossover might be possible, enough to indicate that further gains are in the cards.

In that case a test of the channel resistance might happen near the 61.8% Fib or the $420 area of interest. If this keeps rallies in check, bitcoin price could still resume its impulse wave back down to the bottom of the channel. On the other hand, increased bullish momentum could trigger an upside breakout and a move to the next ceiling at $440-450.

RSI is on middle ground but appears to be pointing down, which means that sellers are still in control of price action. Stochastic is making its way down from the overbought zone, providing a clearer signal of bearish momentum.

A couple of major central banks have already announced their monetary policy decisions, with the Bank of Canada keeping their benchmark rate unchanged at 0.50% and the Reserve Bank of New Zealand lowering theirs from 2.50% to 2.25%. However, these weren’t enough to bust bitcoin price out of its current range, as traders are probably holding out for the ECB statement today.

The European Central Bank is likely to expand its quantitative easing program and lower deposit rates much deeper into negative territory. Based on the European stock market performance, businesses might welcome additional easing measures as this would mean cheaper credit and increased spending activity.

However, another disappointing announcement similar to their December statement could lead to a euro rally and a feeble stock market performance, as investors would like to see more stimulus efforts from the central bank. As for bitcoin price, it’s tough to determine how it might react to ECB easing scenarios.

Because of that, it would be best to simply observe price action during the actual ECB monetary policy statement and accompanying press conference to gauge how it impacts overall market sentiment. A return in risk appetite could mean gains for bitcoin price all the way up to the top of the channel while a bout of risk aversion could lead to a selloff to the support at $380 or perhaps even a breakdown.

If so, bitcoin price could head down to the next floor around $350 then at $300. However, this might be unlikely since traders are also careful of piling on their dollar long positions ahead of the FOMC statement later on this month.