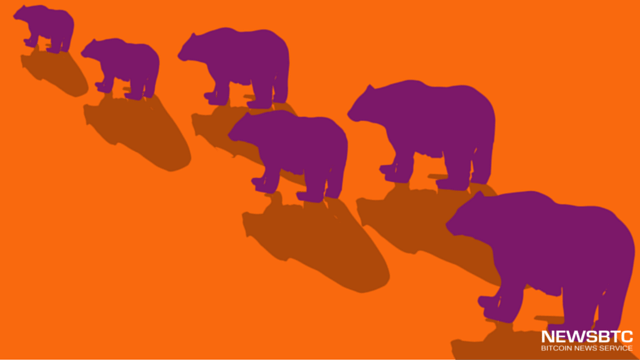 Bitcoin price has taken a pause from its recent sharp drop, as sellers are waiting for more downside pressure.

Most of the technical indicators on the 1-hour chart of bitcoin price seem to suggest that more losses are possible. The short-term 100 SMA has just crossed below the longer-term 200 SMA, indicating that the path of least resistance is to the downside.

If a pullback occurs, the moving averages might be able to hold as dynamic resistance levels near the former support at $440-450. A break above this area, however, could signal that bullish momentum is taking hold once more.

Meanwhile, stochastic is pointing south after spending some time in the overbought zone. This means that sellers are ready to take the upper hand again, possibly pushing bitcoin price to the next support around $400.

RSI is on middle ground and on the move up, though, so there’s a chance that buyers could stay in control. If so, a rally towards the near-term resistance at $440 is a possibility, and stronger bullish momentum might even lead to a test of the previous highs at $465.

Looking at the longer-term time frames of bitcoin price suggests that bearish momentum is in play since it just came off a test of the triangle resistance then proceeded to break lower. Of course this could still depend on upcoming catalysts for the rest of the week, particularly when it comes to US economic data.

Potential catalysts for bitcoin price volatility this week include the release of US retail sales, PPI, and consumer sentiment data on Friday. The numbers might come in strong, especially since the holiday season probably kept consumer spending and confidence supported.

However, weaker than expected results could result to sudden losses for the dollar, boosting bitcoin price up the charts. Still, the US dollar is also able to rely on its safe-haven appeal, with investors scurrying to buy up the lower-yielding currency when risk appetite is weak.

Commodity prices and the slowdown in China are still dominant market themes for this week, although to a much weaker extent than that of last week. Crude oil prices continued to tumble, weighing on demand for riskier assets such as cryptocurrencies.

Tags: bitcoin pricebtcusd
Tweet123Share196ShareSend
Win up to $1,000,000 in One Spin at CryptoSlots