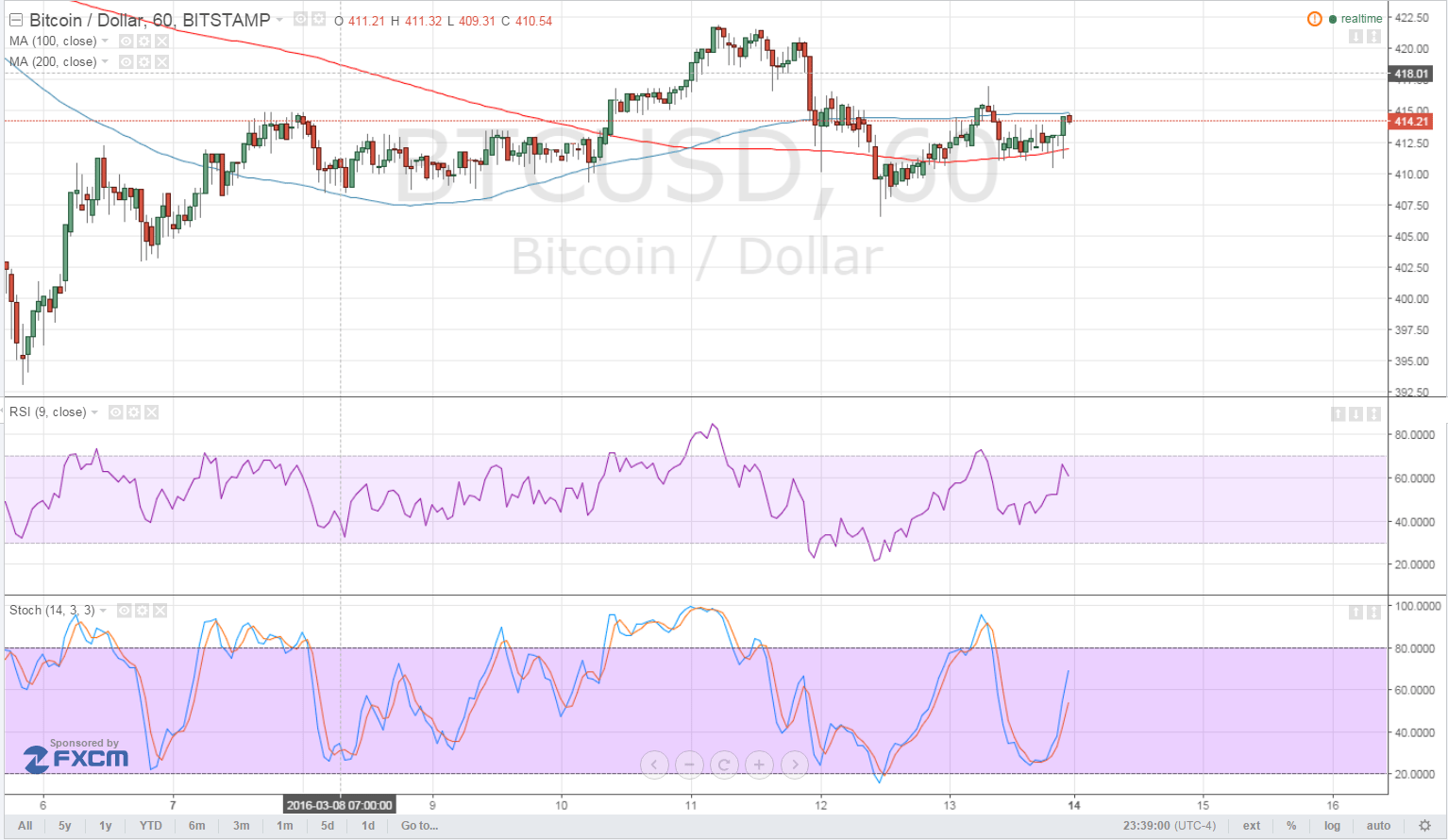 Bitcoin price formed a head and shoulders pattern on its short-term chart, suggesting that a drop to the $380 area might take place again.

The 100 SMA is above the longer-term 200 SMA so the path of least resistance is still to the upside. This means that bitcoin price could still test the previous highs at the $420-245 area.

However, RSI is pointing down so price might follow suit, moving down to the area of interest around $410. A break below this level could confirm that further losses are in the cards. The chart formation is around $30 tall so the resulting breakdown could be of the same size, taking bitcoin price to $380.

Meanwhile, stochastic is pointing up so buyers might still be in control of bitcoin price action. In that case, a move past the previous highs might still be possible unless the oscillator reaches the overbought zone and turns lower soon.

Last week’s market events inspired a lot of volatility but bitcoin price was torn between responding to dollar weakness or taking advantage of risk appetite. Easing measures announced by a couple of major central banks namely the European Central Bank and the Reserve Bank of New Zealand weighed on the higher-yielding assets, as these reminded investors that a global economic slowdown is still imminent.

This week, another batch of central bank events are lined up, possibly adding to bitcoin price volatility. The FOMC statement is set midweek and this would also contain the updated forecasts on growth and inflation, as well as the dot plot of rate hike expectations, possibly driving longer-term dollar price action. Indications that a couple of rate hikes are still possible before the end of the year could keep USD supported against bitcoin price.

Other monetary policy statements include those from the Bank of Japan, Bank of England, and Swiss National Bank. No additional easing measures are expected but policymakers could also take a dovish stance similar to those in the previous week.

As always, commodity price action could also influence bitcoin price. Last week, reports of rising stockpiles weighed on crude oil price and bitcoin while falling US oil rig counts drove prices of both assets higher. More headlines on the upcoming OPEC meetings could provide more direction, although these would be mostly speculations until the actual huddle on March 20.

Profit-taking scenarios towards the end of the week might also take place since market closures are lined up for the following Holy Week, which comes ahead of the end of the month and quarter. With that, be on the lookout for potentially large reversals for bitcoin price then.