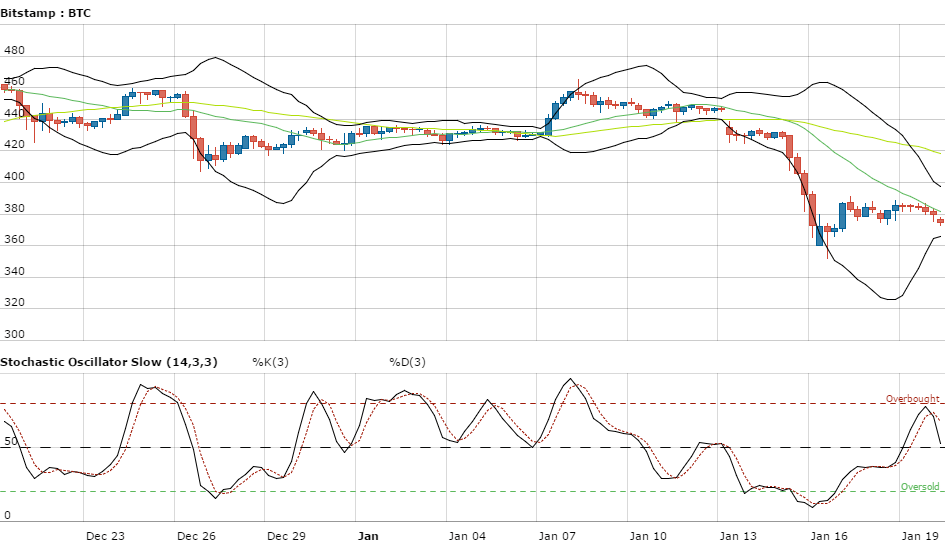 Bitcoin price seems poised for more declines, putting it on track towards testing a major support zone visible on the longer-term time frames.

The short-term 20 SMA is crossing below the longer-term 50 SMA, confirming that a downtrend is taking place and that selling pressure could pick up. Price recently made a quick bounce off a nearby support zone, as profit-taking took place, but it looks like bears are ready to take control once more.

However, stochastic is already in the oversold region, which means that sellers are still exhausted. Once this oscillator starts moving higher, bullish pressure could stay in play and pave the way for a larger correction, possibly until the $400 mark.

At the moment, risk appetite appears to be waning once more, as the IMF recently decided to lower their global growth forecasts for 2016 and 2017. The institution highlighted the risks stemming from the slowdown in China and the slump in commodity prices, particularly to emerging economies.

With that, the safe-haven US dollar is reigning supreme against most of its counterparts, particularly the riskier assets like bitcoin and other cryptocurrencies. This supports the idea of further losses for bitcoin price.

Zooming into a short-term time frame reveals that bitcoin price may be poised for yet another strong breakout. The Bollinger Bands are getting tighter, indicating that buyers and sellers are still fighting to pick a direction.

Stochastic is just moving down from the overbought region, which suggests that bearish momentum is also gaining ground from this perspective as well. Near-term resistance is located at the top of the bands and the moving averages while a close below support at the $350-360 levels could be indicative of further losses.

Catalysts for stronger moves today include the release of UK jobs data, as weak readings could reinforce the BOE’s downbeat outlook and result to more risk-off flows away from bitcoin. Aside from that, the US CPI and building permits data could also influence market sentiment and US dollar demand.

Strong CPI readings could revive hopes of a March Fed rate hike, which could mean higher demand for the US dollar and another set of losses for bitcoin price, while weak data could allow a larger correction to take place.

Charts from Bitstamp, courtesy of CryptoCompare.com