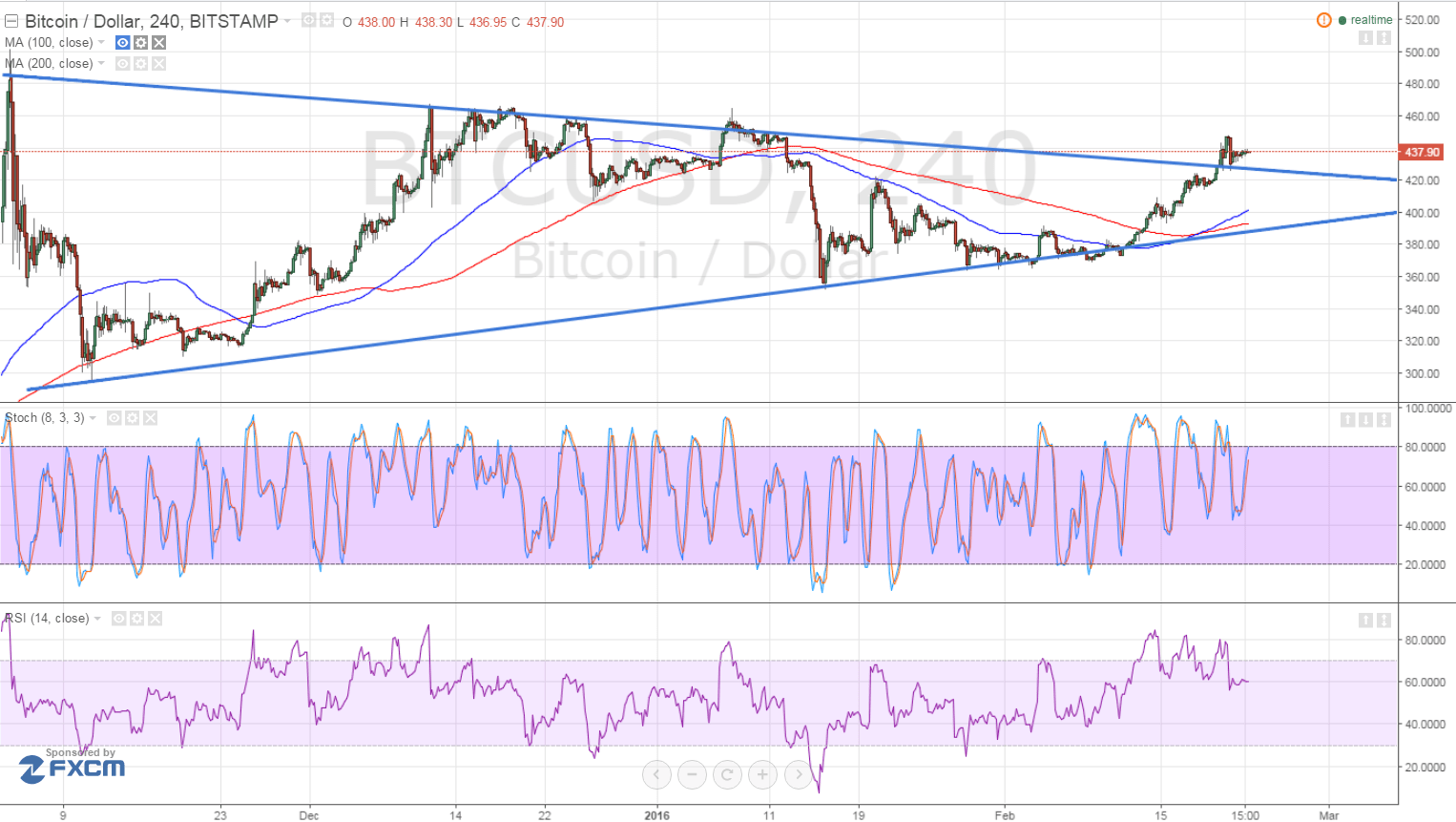 Bitcoin price seems to be forming a bullish continuation pattern following its upside break from a long-term triangle formation.

Technical indicators appear to be supporting the idea of further rallies, as the 100 SMA just crossed above the longer-term 200 SMA. This suggests that the path of least resistance is to the upside, although these moving averages are still in the middle of oscillating for now so the range-bound behavior might resume.

Stochastic is pointing up, confirming that buyers are in control of price action. However, the oscillator is already nearing the overbought levels so a return in selling pressure may be imminent. If so, a move back inside the triangle could be seen, with bitcoin aiming for the bottom at $400.

In addition, RSI is on the move down, which means that bearish momentum is in play, keeping bitcoin price from breaking past the recent highs near $450. Still, a move past this area could draw more bulls to the fold and allow bitcoin price to sustain its climb to the next resistance at $465.

There haven’t been a lot of data releases to affect the US dollar so far this week, although medium-tier reports have been mostly disappointing. The flash manufacturing PMI slid from 52.4 to 51.0, worse than the projected drop to 52.3, but wasn’t enough to spur a sharp selloff in the dollar yesterday.

So far, risk-taking is still present, supporting the commodity currencies against the dollar and European currencies. However, bitcoin price is being tugged in both directions, as fears of a Brexit could wind up weighing on overall market sentiment.

Early surveys are suggesting that the Brexit vote might be a close call, and the London mayor’s support for an EU exit might tip the odds. This could bring more uncertainty to the UK and the global economy, which is still dealing with the risks from China and emerging economies.

For now, it looks like the expected rebound in crude oil could keep risk appetite and bitcoin price supported, as OPEC nations continue to iron out an agreement that could help boost prices. Positive updates on this front could lead to another leg higher for bitcoin price while the lack of an accord could push it back inside the triangle.

On the short-term time frames, bitcoin price is still trading safely above a rising trend line, which might hold enough to keep further losses in check. A break below the trend line could inspire a larger correction, possibly until the $420 support area but it appears that weakening dollar demand could keep the uptrend intact.

Charted: Dogecoin (DOGE) Surges 50%, Here’s Why The Bulls Are Not Done Yet