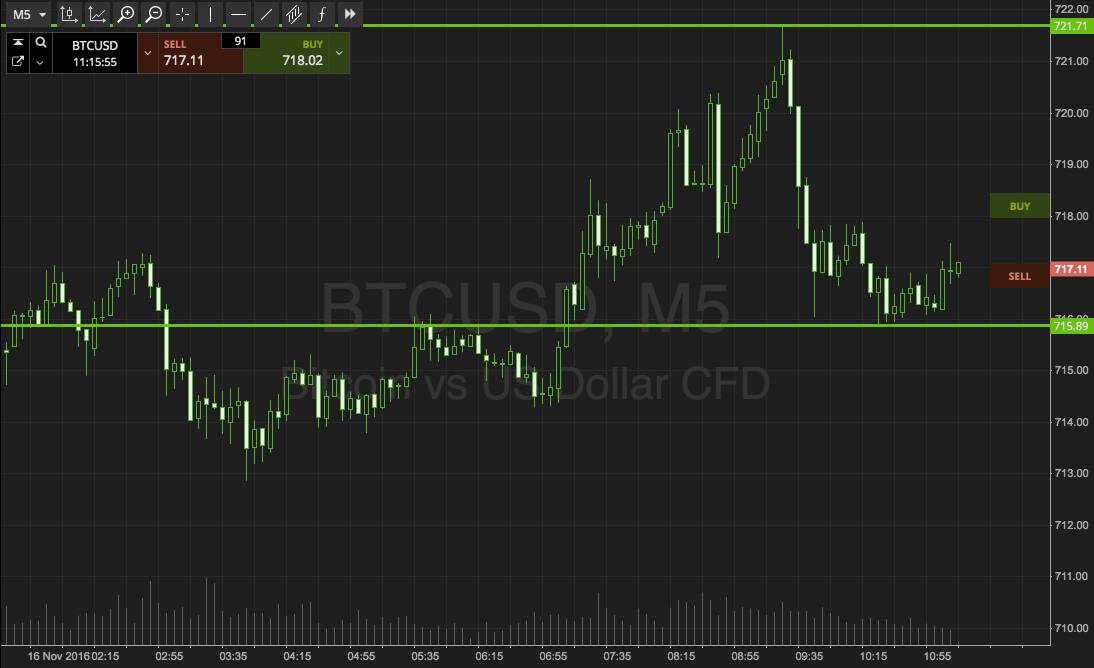 Right, we’re mid way through the week, and it’s been a little bit unpredictable so far. The bitcoin price has sort of settled into a circa $20 range trending between the 700 flat mark to the downside and the 720-30 mark to the upside. There’s an obvious opportunity on the slightly longer term charts to take advantage of this range and have a go at intrarange trading, but on the narrow time frames, such as the one we are looking at twice a day, it’s not that simple.

We’ve preferred a breakout strategy over the last week or so, and I think we are going to try and stick with that for the time being, just to ensure we stay on top of things.

So, with this said, and as we move forward into today’s session, let’s try and outline some key focus levels and bring things together for hump day.

As ever, take a look at the chart below to get an idea of what we are focusing on, and where we are looking to get in and out of the markets according to our intraday strategy. The chart is a five minute candlestick chart with our range overlaid in green.

As the chart shows, the range in focus is defined by in term support to the downside at 715 flat, and in term resistance to the upside at 721. It’s a relatively tight range, so once again we’re going with a breakout approach only, at least for now.

So, if price breaks above resistance, and we see a close above this level, we are going to get in long towards an immediate upside target of 728 flat.

Conversely, if we see a close below support, we’ll get in short towards 710. Both trades need a pretty tight stop, weighted towards the latter (since the reward is tighter) so we’re looking at two or three dollars either way as effective management.