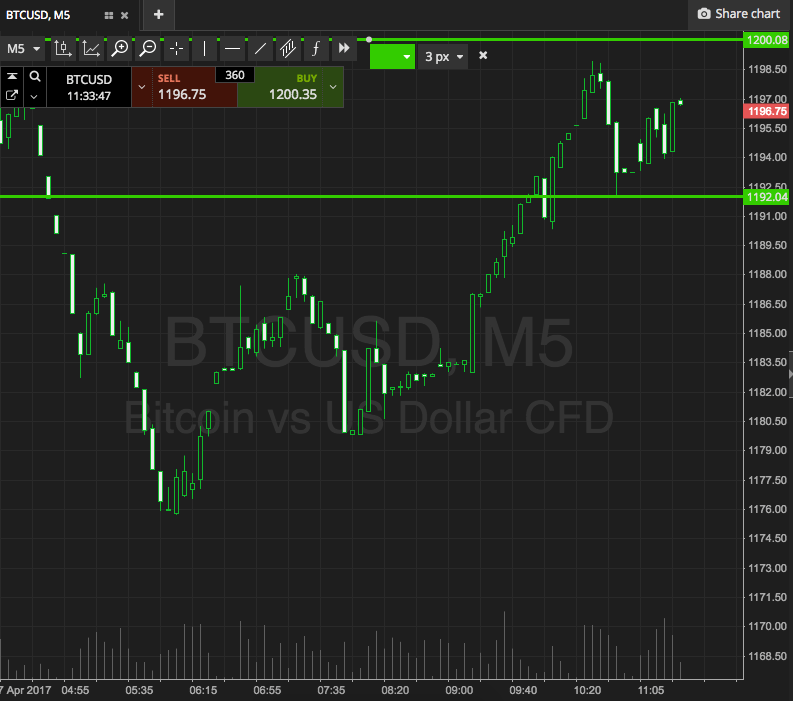 Well, we wanted movement, and we’re getting some! The bitcoin price has leapt out of its relatively dormant state, and we’re finally looking likely to hit one of our key long term break levels during a European daytime session. Anyone who has been with us for a bit will know that we’ve been focusing pretty heavily on the 1100, 1200 range. Basically, we’ve been relying on these two levels to give us a longer term bias. If the latter breaks, we’re bullish, if the former breaks first, we’re bearish. Simple.

We’re now trading at just shy of the 1200 mark, and it’s looking like we’re going to get our preferred bias of the two – an upside one.

As a fundamental side note, there’s something to be said for bitcoin managing to appreciate in value against the backdrop of disagreement and disruption that the hard fork and Unlimited is causing. This suggests, to this author at least, that things aren’t as precarious as many claim.

Anyway, that’s a discussion for another day. We’re here right now to get some levels outlined for our intraday efforts, so let’s get on that. As ever, take a quick look at the chart below to get an idea of what’s on before we get started and get in to the detail. It’s a five-minute candlestick chart, and it’s got our key range overlaid in green.

As the chart shows, our focus range for the session is defined by support to the downside at 1192, and resistance to the upside at the big 1200. Tight range, tight targets, tight stops.

We’re going to look at getting into a long position on a close above resistance, with an immediate upside target of 1210. Conversely, a close below support will signal a short entry towards 1182.