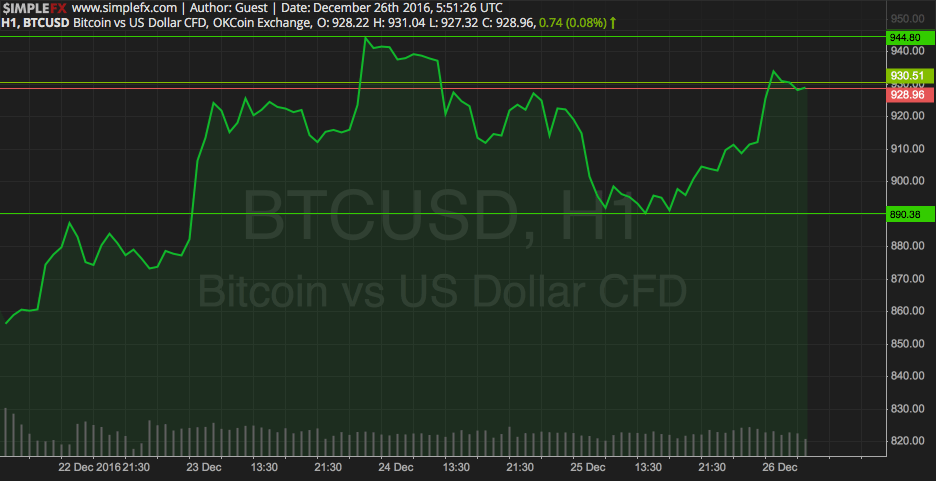 Merry Christmas Bitcoin traders! To those who wished Santa Claus for a steady Bitcoin recovery following its massive bearish correction towards 890 must be special, as it took place just fine in the past 12 hours.

Ever since the last week’s massive rally towards 944 fiat, even we were feeling peculiar about its longevity in medium-term. Reason is the same: Bitcoin has hardly resonated with extended bullish sentiments after surprising markets with bull runs. Last time, it was back in August 2016, when Bitcoin price had massively dropped after the news of BitFinex hack broke out. And further back in 2013, the price had crashed from $1200 to $200 — roughly — after the Mt. Gox hack. That being said, as much as we feel excited by these rallies, our nerves also beat on any sign on massive correction, which took place during Dec 24th US trading hours.

But, at the same time, we were able to draw our profits on time and exit our position on a very small loss once price hinted downside action. As we now headed into European session on a holiday, with Asian session still in play, let’s see where we are looking to get in and out of the markets going forward.

Please have a look at the 1-H BTCUSD chart:

So, as the chart shows, the levels in focus for the early session are 890 serving as interim support, and 930 as interim resistance level. As bitcoin price is already close to testing resistance, we are looking to apply intraday breakout in this case. That being said, a close above 930 will have us put a long position towards the intraday peak level at 944 fiat. On this trade, a stop loss at 925 defines risk strategy.

Conversely, a brief correction period, if arises, will have us switch to intrarange strategy, where a short position towards 900 at first will be imminent.