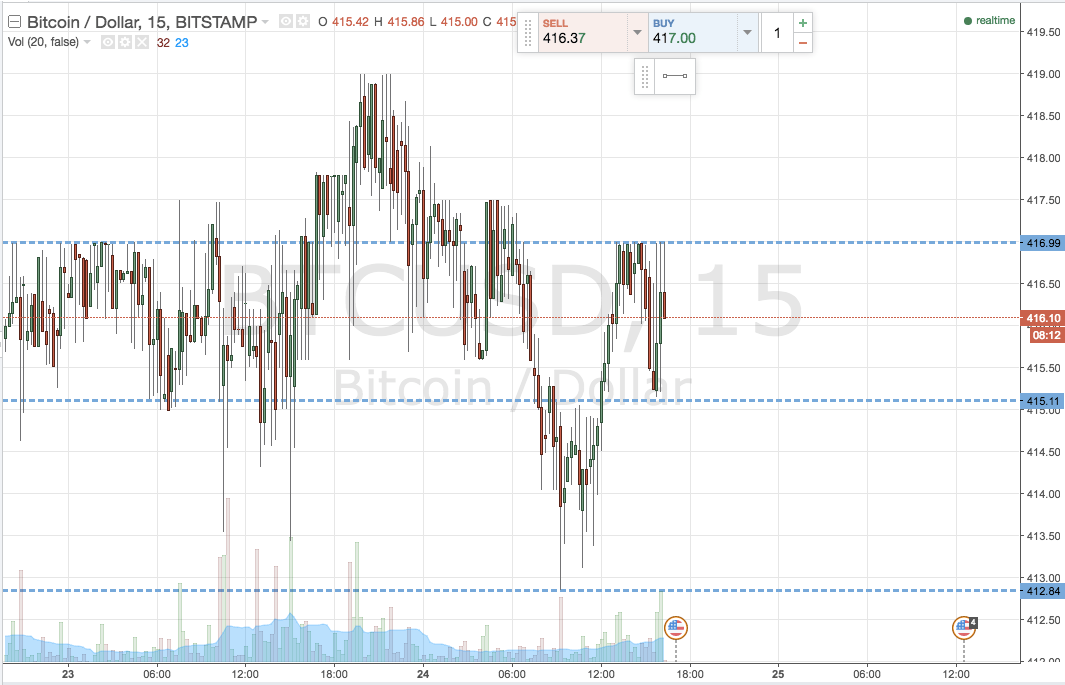 Let’s start this evening’s analysis with a chart. The chart below highlights the action we have seen across the last six or so hours in the bitcoin price (throughout the European session morning and early afternoon) with this morning’s framework still applied. We’ve left it on there to highlight the position we are currently in, and the levels that both got us in to this position and that we are targeting on the trade.

As the chart illustrates, we took a long position on the break of in term resistance at 141.85, and targeted 419 flat – yesterday’s highs. Considered against some of our recent trades, it’s a pretty aggressive target, but action straight after the breakout looked as though we were going to have no problem taking it out. Half way to the hit, however, the bitcoin price reversed, and we declined to test resistance as support a little wile ago. It held, however, and we remain within range. Since we are still in this trade, we’re going to be staying out of any fresh positions this evening, until this one resolves. For those that aren’t in a position, however, here’s a look at what today’s action has done to our breakout framework, and some potential entries and targets on tonight’s volatility. The chart below shows the fresh framework.

As the chart shows, the range is defined by in term support at 415 flat and in term resistance at 417 flat.

If price closes below in term support, it will signal short towards an initial downside target of 412 flat. A stop on this one at 416.5 should keep things tight from a risk perspective.

To the upside, a break and close above resistance will signal a long entry with a target of 422, and a stop at 415 will limit our downside on the position.

Tags: bitcoinbitcoin pricebitcoin price watchbitcoin technical analysisbtcusdlearn to trade bitcointrade bitcoin
Tweet123Share196ShareSend
BitStarz Player Lands $2,459,124 Record Win! Could you be next big winner? Win up to $1,000,000 in One Spin at CryptoSlots