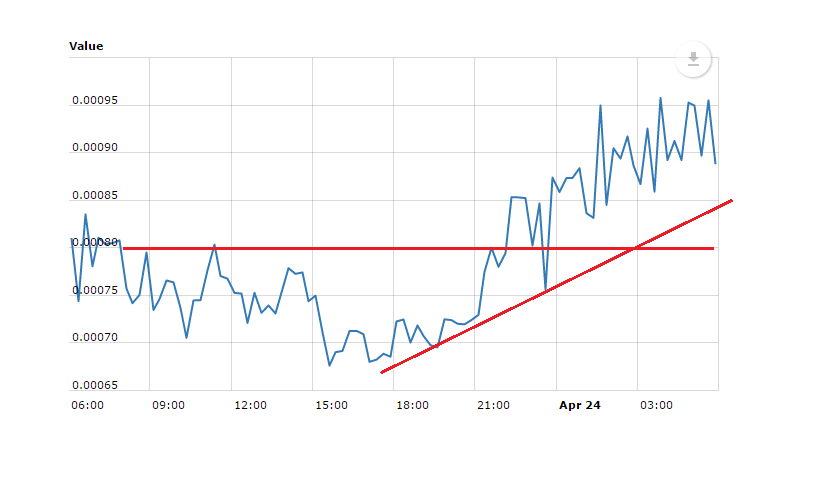 Creditbit price moved down towards 0.00070BTC recently against the Bitcoin, but later CRBIT/BTC got bid, and now moving higher with positive bias.

There were a few downside swings in Creditbit price towards 0.00080BTC and 0.00070BTC against the Bitcoin. The price was under a bearish pressure, resulting in a downside move until it found support at 0.00067BTC. Later, the price started a recovery, and managed to move back above the 0.00080BTC resistance. The price also moved above the 23.6% Fib retracement level of the last decline from the 0.00120BTC high to 0.00067BTC low.

It was a positive sign, and lifted the market sentiment. Later, the price managed to clear the 0.00085BTC resistance, and traded as high as 0.00095BTC. At the moment, there is a connecting bullish trend line formed with support at 0.00080BTC on the 1-day chart of CRBIT/BTC. It is holding the current trend well above the 0.00080BTC support. And, since the price is above the 38.2% Fib retracement level of the last decline from the 0.00120BTC high to 0.00067BTC low, it may rise further.

However, the price need to break the 0.00095BTC in order to gain further strength. On the downside, we can keep an eye on the 0.00080BTC support. It can act as a pivot zone now if the price dips again in the near term.

Hourly MACD – The MACD for the CRBIT/BTC pair is moving positively in the bullish zone.

Hourly RSI – The RSI for the CRBIT/BTC pair is currently well above the 50 level, suggesting bullish moves.