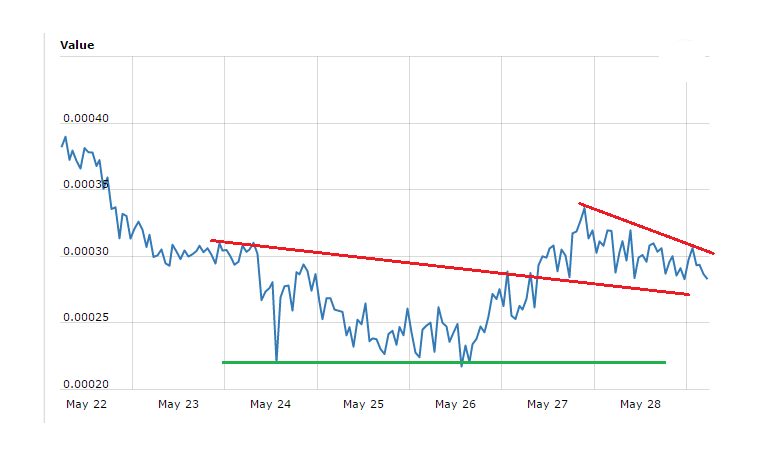 Creditbit price managed to gain bids against the US Dollar and Bitcoin. CRBIT/BTC is now trading above the 0.00025BTC resistance and might head higher.

In the last analysis, we saw a channel resistance is at 0.00028BTC and 0.00027BTC in Creditbit price against the Bitcoin. The price was seen struggling to break the mentioned resistance. As a result, there was a minor dip back towards 0.00022BTC before there was a support formed and the price started a recovery. The upside move was positive, as the price was above the break the 0.00025BTC resistance as well.

There was a break above a bearish trend line at 0.00027BTC on the 7-day chart of CRBIT/BTC, opening the doors for upsides. Furthermore, the 38.2% Fib retracement level of the last decline from the 0.000398BTC high to 0.000221BTC low was also cleared. These all are positive signs, as the price is now above the 0.00025BTC resistance.

On the upside, there is a tiny connecting bearish trend line with resistance at 0.00030BTC. Once it is breached, there can be more gains towards 0.00040BTC. On the downside, the broken trend line at 0.00028BTC is currently acting as a support. Moreover, the 0.00025BTC level is also a major support, followed by the 0.00022BTC base. As long as the price is above these, there can be a move towards 0.00040BTC.

Hourly MACD – The MACD for the CRBIT/BTC pair has just moved into the bullish zone.

Hourly RSI – The RSI for the CRBIT/BTC pair is now above the 50 level, but struggling.