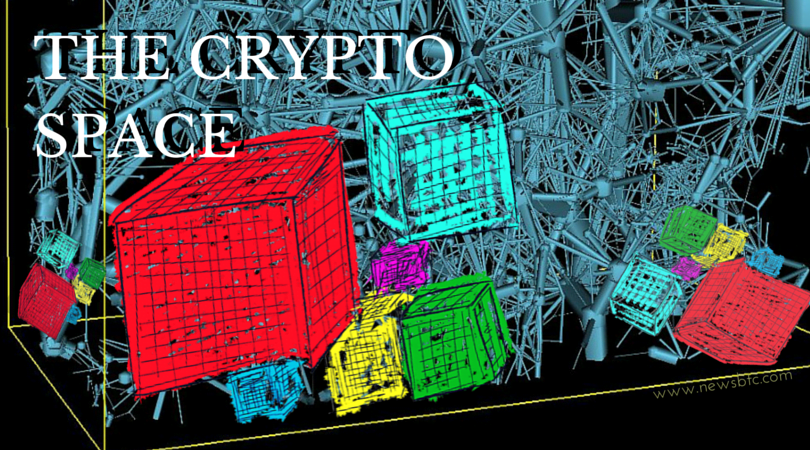 Topology is an abstract field, but it has many real-world applications. One of the most notable to the average Bitcoin user is network topology, which studies the shape of a network, including peer-to-peer networks like Bitcoin’s. Now we’re beginning to apply topology to the blockchain, itself.

As previously mentioned, the blockchain is a metric space using difficulty as its continuous function, generated by a compact and connected set of hash values. This framework allows us to say many interesting things about a cryptocurrency’s blockchain, but this article will focus on how they interact with one another.

One of the most essential properties of blockchains is that they are public: anyone can see what’s published on one, or get a copy for oneself. Blockchains can therefore be said to lie in the public space. Public space can be defined as the space generated by the public set, the set of all data that is publicly accessible

The public space has no real structure or boundaries; it is compact, and its invariant is accessibility. To test whether or not given data is part of the public set, you simply try to acquire it. Repeat with observers from many different backgrounds, and if everyone successfully accesses the data, it’s safe to say it’s in the public space.

The public space is not a true metric space; since not all of the information out there is cryptographic, we cannot measure how difficult it would be to decipher. Everything at your local library is a great example, unless they’ve gone digital and Factomized their book collection. The connectedness of that space, however, is an interesting debate.

Most data enters the public space disconnected from the rest of the public set, such as the moment a new site goes live on the World Wide Web. It is extremely easy, however, to hash such web data and combine it with other hashes in a Merkle tree. You could hash the entire WWW together this way, which would connect its corresponding data elements.

The benefit of doing this is verification: if you store a webpage after it is taken down, you can prove you have an authentic image of the original by comparing its hash value to the Merkle root calculated before. This process is known as proof of existence, which can be topologically described as the connection of two data elements in the public set.

You can do this at the cost of one Bitcoin transaction fee by inserting the web hash into it. It will be thereafter hashed together with the other Bitcoin transactions in that block, and become connected to the entire blockchain. You could then calculate the difficulty from the original data to the top hash of the latest block, which form the boundaries of a connected metric subspace.

People will inevitably want to backup their data to more than one blockchain as a failsafe; this effectively connects their data sets together to form a single metric subspace of the public domain. There are also several benefits to hashing one blockchain into another, the combined effect being that many blockchains will join together.

Soon, proof of existence will become standard practice. Using technologies like Factom, we can rapidly combine thousands of entry hashes together into a single Merkle root without relying on a central authority, making proof of existence even cheaper and more reliable. It will be as easy as using a Bitcoin wallet, and the costs will be negligible compared to the rewards.

The end result is that most data in the public space will be connected. What little information isn’t hashed into a Merkle tree on its own will be simple for the intellectually or ideologically driven to take care of. We shall call the topological space generated by this data set the crypto space, in honor of the community poised to accomplish that.

Hashing data is easy, so the crypto space grows much faster than the public space, and they will eventually approximate one another. How quickly public data enters the crypto set depends on its connectability, which is its tendency to utilize or be utilized for proof of existence. It depends mostly on how likely that data’s authenticity is to be disputed–financial records such as loans are more connectible than what you dreamed about last night, for example.

Another lead factor in the connectability of data is authenticity. Authenticity refers to how likely data is to be authentic, a competition dominated by blockchain technology. A blockchain’s authenticity is a factor of the current difficulty of double-spending a transaction (the number of active miners or minters) and the health of its peer-to-peer network (the number of full nodes).

Like many emerging or “controversial” scientific theories, these hypotheses will be hard to test. We will have to rely on simulations and observation over a long period of time, but this is not unheard of in the hard sciences. We can forecast astronomical events, climate change, and even the evolution of species.

The crypto space will come to be as important as the crypto industry itself, one of the fabrics upon which society is built. Its general shape is still emerging, but soon we will know what it looks like, and it will be the subject of intense study.