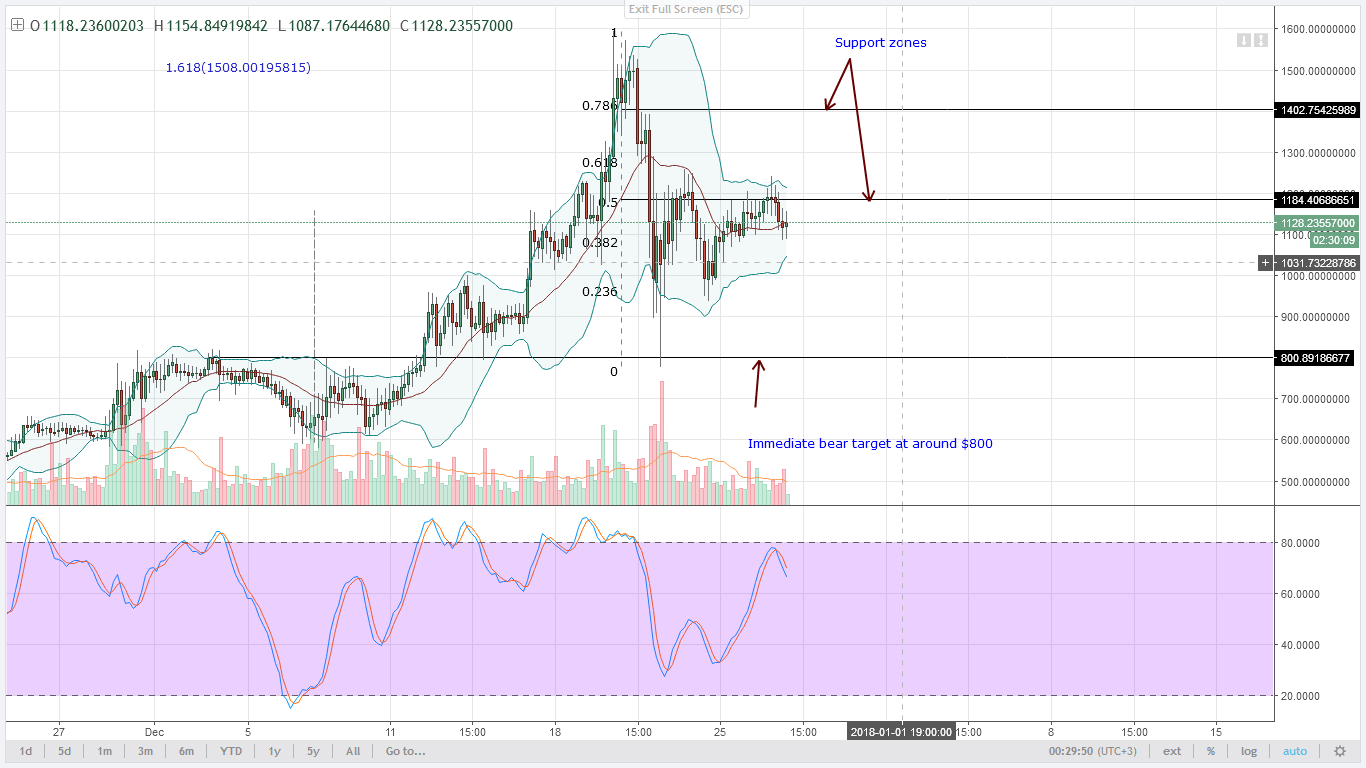 DASH at $800? Yes, maybe, maybe not. Who knows, no one got future prices mapped out but if it does hit that level and some buyers jump in, please don’t look back. Just buy.

Like other crypto-currencies, the 61.8% Fibonacci level drawn from last week’s high lows is proving significant.

DASH, Monero and IOTA are turning from the same level. If sellers clear critical supports, then we all ramp up sells.

As per yesterday’s recommendation, sell pressure will be amplified if NEM sellers drive and close below the middle BB.

Currently, we have two whole candlesticks that are below the 20 period MA complete with a stochastic sell signal turning from the overbought territory.

Of course this bear pressure may continue today and in that case our bear targets will remain unchanged.

We chilled and indeed, the fruits of this minor patience seems to be paying off. While we understand the larger time frames hints of sustained bear pressure, we have to wait for confirmation in the lower time frames and trade accordingly.

As it is, DASH has a stochastic sell signal turning from the over-bought territory in our entry time frame and reversing straight from the 50% Fibonacci retracement level.

DASH bears can continue loading up their sells and aim for $800. By all accounts, DASH at $800 seems far-fetched but it is very attainable.

I will reiterate again, IOTA will continue selling maybe for the next two weeks. That is my opinion but if price action has other plans, then of course we have to see that here on the charts.

From yesterday’s set up, we wanted to see sellers jumping in at around $5. However, sellers are already pressing prices lower at the Fibonacci 61.8% level and there’s a sell signal already in the secondary chart.

The plan now is to sell and see wait for reaction at $3.3.

Yes, there is an over-extension and as sellers, we are going to ramp up sells when there is an opportunity. Zooming in to this chart, you notice two things.

The first is the obvious close above the upper BB on December 27 and the second thing got to be these bears mauling Monero. I would have paused right there but look at where this reversal is happening: at the 61.8% Fibonacci retracement levels just like other alt coins. Copying from the same script? I don’t know.

Well, our forecast remains unchanged and because of these two combinations, sellers are waiting for bears to squeeze their triggers.

Anytime bears close below the middle BB equalizer, then boom, we short and aim at last week’s lows of around $250.

The script is the same while players are changing. See the stochastics? Bear momentum is strong and while at it, the resistance trend line and the middle BB are a perfect ceiling.

I won’t dispute chances of buy pressure in the coming sessions that is why I say, provided there are better signals to trade with the trend, I remain a bear until maybe after $200 or $150 is hit and there are some serious upswings.

According to my analysis, if LTC prices dip below $250, then kaboom! I expect red lights to flash.