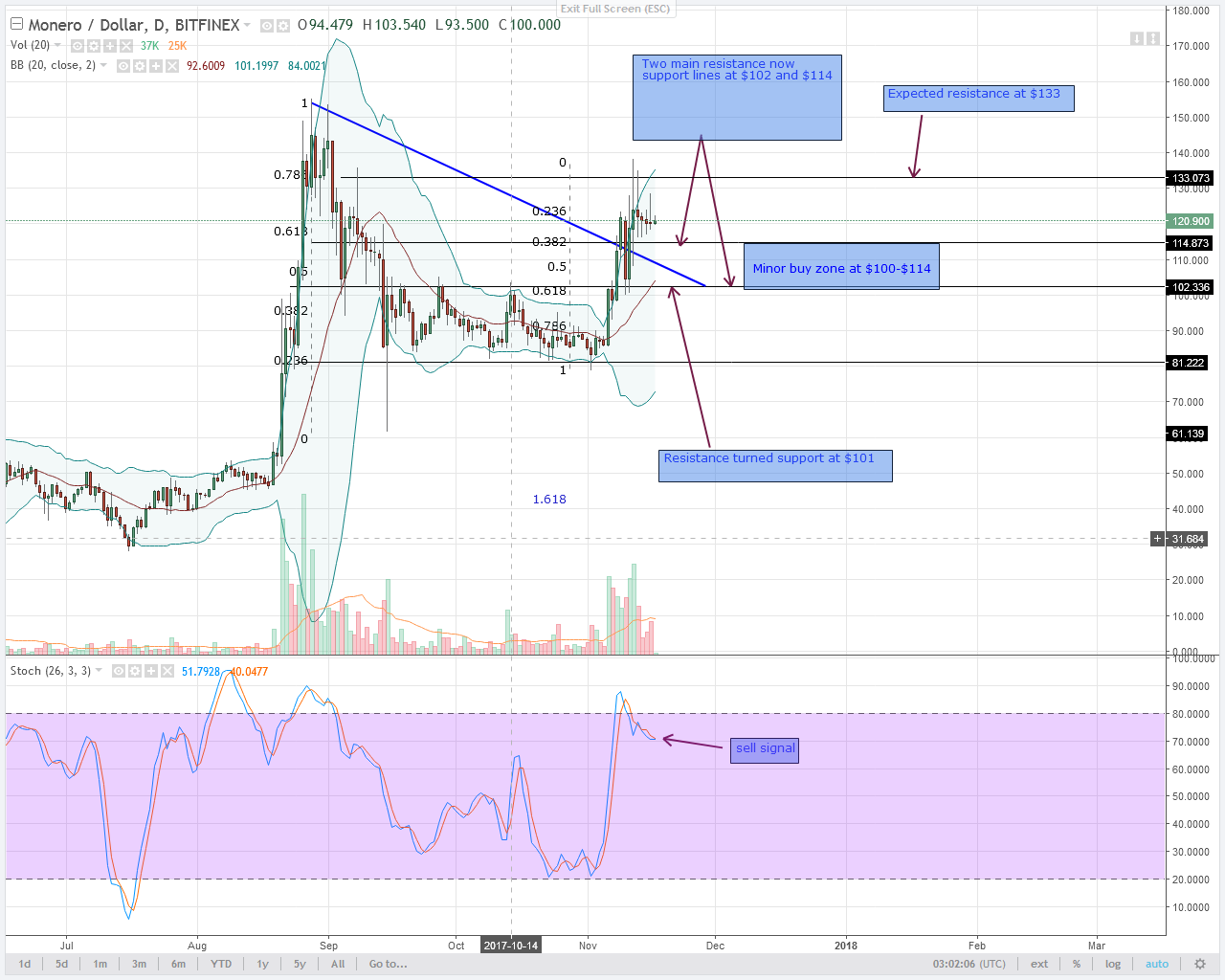 After last week’s mega rally DASH and Monero appears to be topping with equal bullish and bearish pressure. As noted, three consecutive dojis have formed over the past three days forming spinning tops. We still retain our bullish skew provided that prices reverse around key Fibonacci levels with a buy signal in place either in the daily or 4HR time frame.

NEM GAINS $0.08 AND CLOSES ABOVE THE SUPPORT LINE

By moving $0.08 yesterday, NEM bulls confirmed the previous day bull candlestick and ended up closing above the support of $0.20.

Secondly, despite the upper long wick showing USD bulls, the fact that NEM prices are above the 20 period MA show that price action is pro-bulls.That is expected. In fact bulls should be ramping up their long positions in shorter time frames.

The short term goal for NEM bulls is to push prices above the main resistance trend lines above $0.22.

If anything, DASH price action characteristics mean that over the past three days, price action have been moving within a $107 range. That is huge.

The most important thing though is that DASH prices are consistently closing above August highs and triggering any buy limits set between the $370 and $410. $368 is the lowest price in the last three days and is acting as a solid support.

As per our recommendation, the general trend is bullish and as such, any break above $450 means bulls are in charge and we advise long entry then.

With a $0.19 swing yesterday, IOTA was more volatile compared to November 15 when price action surged past the main resistance line at $0.61. However, with November 15 and 16 closing above the upper BB, it means there is temporary   IOTA over-valuation.

In lower time frames, there is an obvious bear divergence with a clear stochastic sell signal. However, in any case, a $0.25 gain for the week means we are buying the body and fading the wicks at both ends of the candlesticks.

MONERO PRICES MOVING WITHIN A WEDGE

As we notice, the Fibonacci retracement levels between 38.2% and 61.8% will define our buy zone. Any buy stochastic buy signal after prices trickle lower below $117 in the 4HR chart means we enter long. By doing that traders shall be in sync with the bullish trend in the weekly chart.

It doesn’t matter how NEO price action turns out to be. At the moment, the most important thing is where the close is at.

As we note, the main resistance trend line and the 20 period MA are now acting as our support. We are still within a $10 range. This means NEO is still ranging horizontally with no definitive break above $30 to signal NEO bull pressure.

Generally, NEO price action and stochastics are drifting upwards. Because of this, intraday traders should only take long positions in the lower time frames.