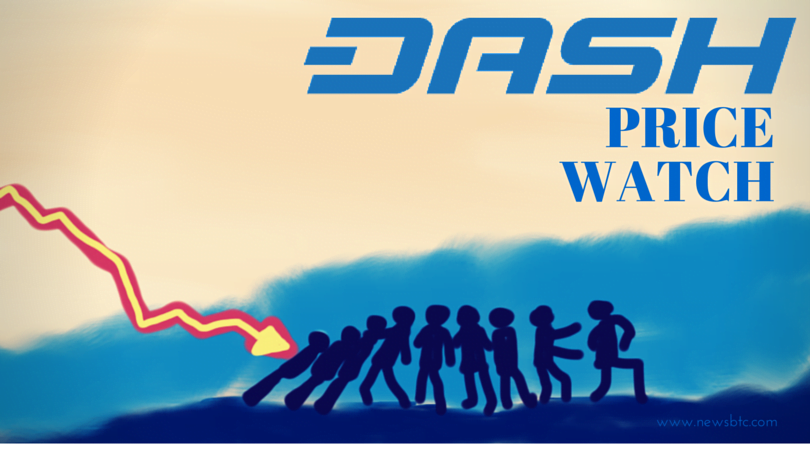 Dash price is slowly grinding lower, and it looks like positioned for more losses once volatility picks up.

We have been following a crucial support area around 0.0119BTC-0.0120BTC, which was breached recently. However, sellers failed to gain pace, and as a result, there was not much of follow through. There was an hourly close below 0.0119BTC, which is the 61.8% Fib retracement level of the last wave from 0.0112BTC to 0.0131BTC. It means the probability of prices moving towards the next support at 76.4% Fib level has increased, which is at 0.01165BTC.

There is a monster bearish trend line formed on the hourly chart of Dash, which might stall the upside if price attempts to move higher. The 100 hourly simple moving average is just above the highlighted trend line, pointing towards the importance of the 0.0120-22BTC resistance area. Only if buyers manage to take the price above 100 MA, we could see a change in the trend. Until then, there is a change of it moving lower.

A test of 0.01165BTC is very likely in the near future, but if sellers succeed in gaining momentum a move towards 0.0114BTC is also possible. Bollinger Bands support might also play a big role in more losses moving ahead.

When we look at the hourly RSI and MACD, then we can convincingly say that Dash is under bearish pressure, and might trade lower in the short term. Let us see how strong the highlighted trend line and 100 MA confluence resistance is, and whether they can push prices lower.