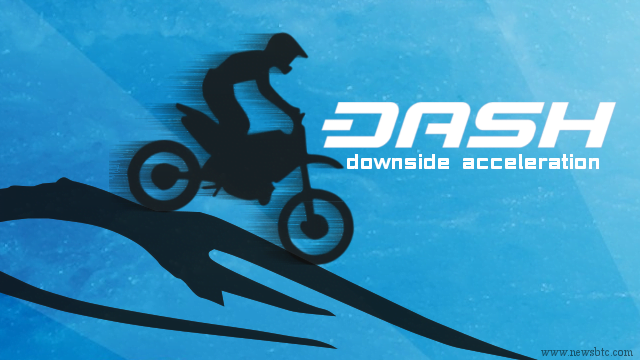 Dash price finally broke a bullish trend line, which we followed for the last few days, and currently looks set for more losses.

Dash price after setting a minor high above 0.0128BTC failed to trade higher and moved lower. It cleared the Middle Bollinger Band, which opened the doors for a break below an important bullish trend line on the hourly chart. The highlighted trend line was also coinciding with the 100 hourly simple moving average, which means the recent break was critical. The price even settled below the 50% Fib retracement level of the last wave from 0.0120BTC to 0.0128BTC.

It is currently trading around the 76.4% Fib retracement level where buyers are fighting hard to prevent further losses as it is colliding with the lower Bollinger band. Any further downside from the current levels might take the price towards 0.0120BTC, which represents a major swing area. The mentioned level acted as a support and resistance on a number of occasions previously, so it could act as a hurdle for sellers moving ahead.

Any more losses may perhaps take the price towards 0.0118BTC. On the upside, the 100 MA might act as a resistance in the short term along with the broken trend line. Moreover, the previous support area at 0.0125BTC could now convert into a resistance.

Both the hourly RSI and MACD are in the bearish zones, which means there is a possibility of a downside acceleration, which could take the price towards 0.0120BTC.