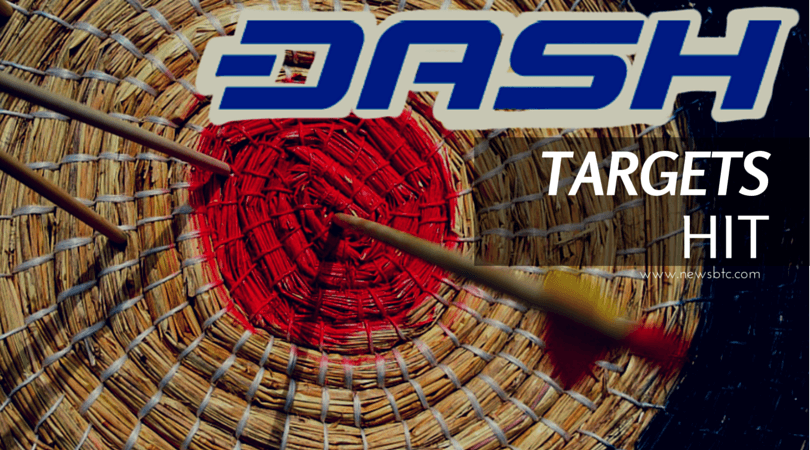 Finally, there was a massive downside reaction, as we were predicting from the last couple of days. Looking ahead, more losses are possible as long as the price is below the 100 MA.

There was a head and shoulders pattern, which we highlighted in on the previous analyses, and waited for a long time for it to take shape. Finally, there was a sharp down-move, as the Dash price settled successfully below 0.0120BTC. The mentioned level was a big hurdle for sellers, and once they managed an hourly close below the same the downside was swift and fast.

Dash prices traded as low as 0.0109BTC, as the Bollinger Bands expanded for the bear rally. The hourly RSI is around the oversold readings, and MACD is also making an attempt to recover from the bearish slope. Overall, there is a possibility developing for a short-term correction.

If the Dash price moves higher from the current levels, then initial resistance might be around the 38.2% Fib retracement level of the last dip from 0.0122BTC to 0.0109BTC. The next level of interest could be around 50% Fib level. The most important barrier for buyers might be around the 100 hourly simple moving average.

The chances of a minor correction is increasing, but the trend is down. So, selling rallies or any major retracement might be one of the best options. On the downside, a break below 0.0109BTC might call for more losses towards 0.0106BTC or even 0.0106BTC in the short term.

Tags: DashDash DarkcoinDash Price Technical Analysisdashpaymore losses to followOpiniontrade target hit
Tweet123Share196ShareSend
BitStarz Player Lands $2,459,124 Record Win! Could you be next big winner? Win up to $1,000,000 in One Spin at CryptoSlots