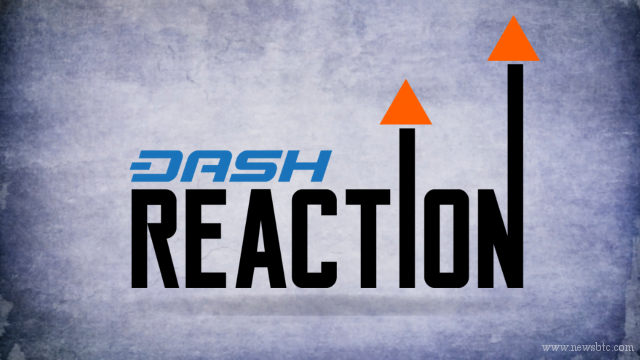 A major trend line formed on the hourly chart of Dash price, which is likely to act as a catalyst for buyers for an upside reaction.

Dash sellers failed miserably to break an important support at 0.0120BTC, which was stated as a major barrier in one of the previous analyses. Moreover, the 100 hourly simple moving average was also positioned around the mentioned area to help buyers. Now, there is a bullish trend line formed, which is moving along with the 100 MA at 0.0122BTC. The mentioned level coincides with the 38.2% Fib retracement level of the last leg from 0.0114BTC to 0.0127BTC. In short, there is a crucial support building around 0.0122BTC that can be seen as a buying zone.

If the price moves lower from the current levels, then sellers are likely to struggle around the highlighted buying zone. Both, the hourly RSI and the MACD are in the positive zone, as the first one is above the 50 level and the latter one is setting up for a larger bullish wave.

On the upside, the most important resistance lies at 0.0127BTC, which is the last swing high. A break above the same could set the Dash price for a test of 0.0130BTC.

Overall, staying bullish is a good idea, as there are many support areas formed on the downside, and it won’t be easy for sellers to take the price lower. A break below the 100 MA might turn the bias to bullish.