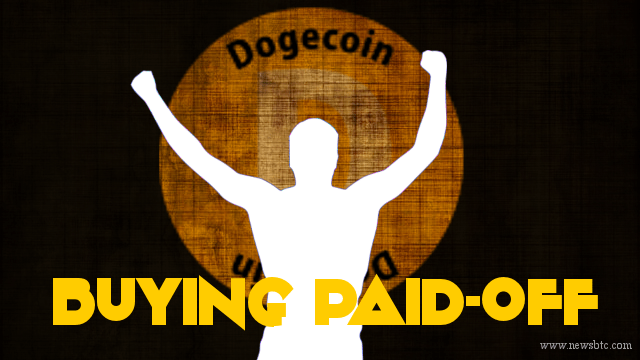 Our plan of buying Dogecoin paid off as the price spiked higher sharply once it settled above 70.0 Satoshis.

Yesterday, we highlighted an important bearish trend line break, and anticipating a break above the range top for more upsides. There was a clear uptrend noted Intraday, which helped the price to surge higher. The upside move was swift, which took the price close to the last swing high of 78.0 Satoshis. Sellers were seen around the mentioned area, as they successfully defended more gains.

The price corrected back lower and trimmed most gains to trade towards the broken resistance area at 70.0 Satoshis. It is currently trading around a critical support area, as it is a confluence zone of 100 hourly simple moving average, the 61.8% Fib retracement level of the last wave from 66.0 Satoshis to 76.8 Satoshis, and the previous swing area. So, it represents a major hurdle for sellers and it won’t be easy for them to break 70.0 Satoshis. Moreover, the Lower Bollinger Band is also positioned around the stated area to add to the value.

The probability of the price finding bids around the 100 MA is a lot more, and if buyers gain traction, an upside move is likely in the near term. A retest of the last swing high around 77.0 Satoshis is also possible in that situation.

On the downside, a break below the 100 MA may perhaps call for a change in the trend.