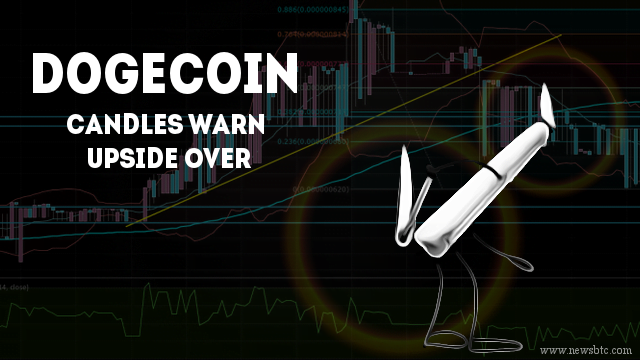 We were following a bullish trend for Dogecoin as the price continued to move higher. However, there was a sharp reaction around 80.0-85.0 Satoshis where sellers defended the upside successfully. Dogecoin has lost most of its gains and moved back towards an important support area of 60.0 Satoshis. It traded as low as 62.0 Satoshis, and might test 60.0 Satoshis in the short term. The mentioned level holds a lot of importance, as it was a major resistance earlier and could provide support to Dogecoin.

There was a bullish trend line formed on the hourly chart, which was breached by sellers during the downside drift. There was also a critical support at 70.0 Satoshis that was broken to ignite sharp losses. This is not all, as the price went below the 100 hourly simple moving average, suggesting that sellers are in control in the near term.

If the price corrects higher from the current levels, then it might face a lot of hurdles moving ahead. The first and foremost is around the 23.6% Fib retracement level of the last drop from 87.0 Satoshis to 62.0 Satoshis, which is sitting around the Middle Bollinger Band. However, the most important resistance is around the 38.2% Fib level, i.e. coinciding with the 100 hourly simple moving average.

On the downside, buyers might continue to fight around 60.0 Satoshis, which is a major swing area. A break below the same might call for more losses and increase pressure on bulls in the near term.