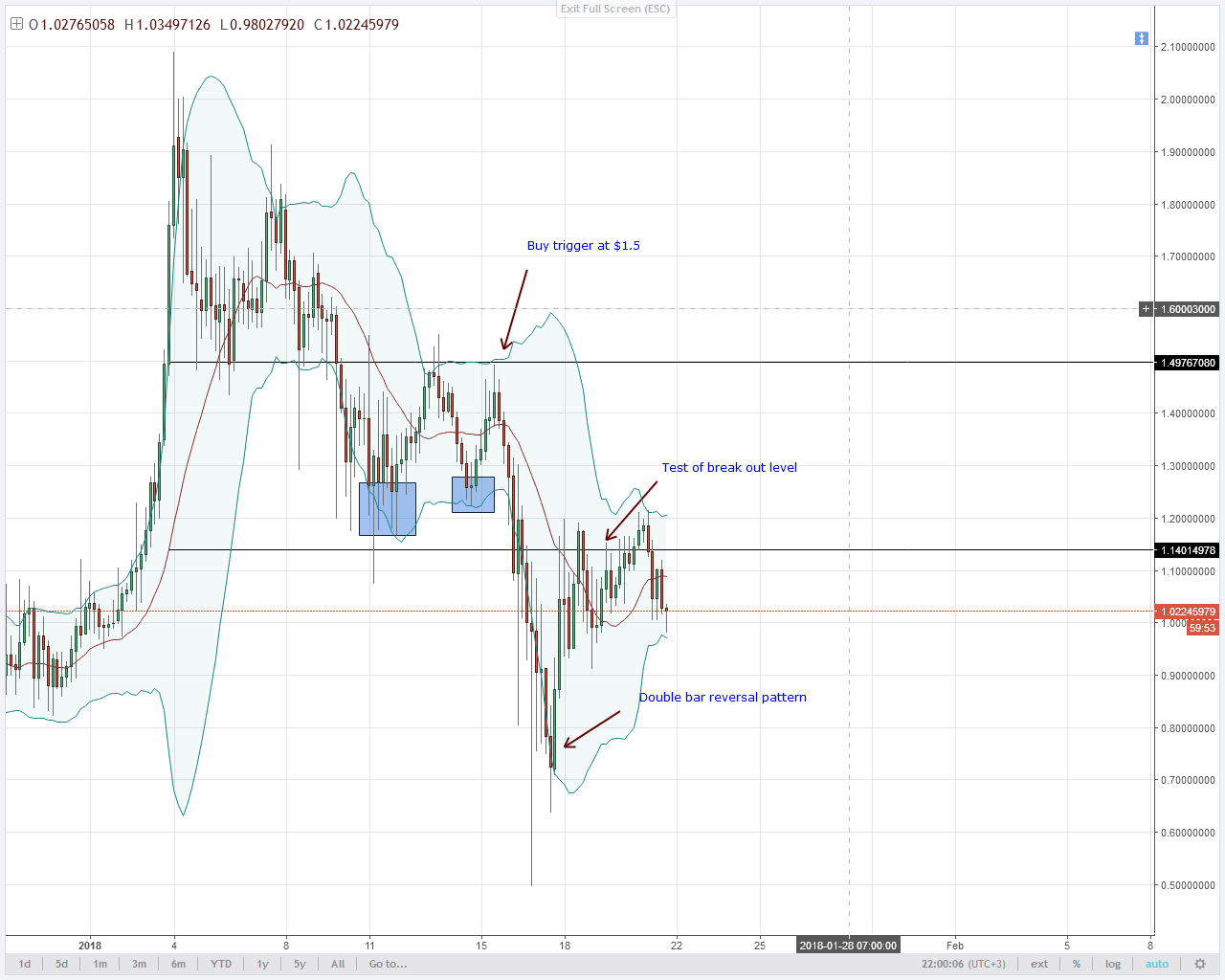 Perhaps the major take away is how NEM found ceiling at $1.14. At that price tag, bears turned aggressive and are now driving prices towards $0.50. Like NEO, we could see some buy potential but not now.

And talking of NEO, bears are officially in charge and we can start planning on identifying correct potential reversal zones in the days to come even if prices appreciate towards $200.

For all we know, we expect NEO sell pressure at around $180 and if high probability reversal patterns begins to form, we can sell. This way, we will be riding with price action as last week’s over-extension corrects.

I must say,  nothing has changed. All that is visible is NEM price action waving and finding strong resistance at around $1.14.

If prices are to move up then we must have evidence.  There would be none convincing other than trading according to January 20 recommendation.

Otherwise, if it stays this way, it will be another bear drive with probable targets at January 16 lows of $0.53.

After an obvious XLM over-extension by week ending January 13, all that was needed was a confirmation.

The response was overwhelming and the result is last week’s strong bear engulfing candlestick with lows testing $0.30.

Extrapolating this bearish pressure and we can see how the minor resistance trend line continues to play the part in the 4HR chart.

In line with our projection, we shall maintain our bear perspective as long as prices remain under our buy territory.

Regardless, if prices bounce off $0.43, sellers should find reasons to short every time XLM price action test that trend defining resistance trend line.

Unlike most crypto-pairs, EOS continue to chart up and even though we had that minor scare early last week, the recovery has been spectacular.

However, there is a reason for concern. Last week’s candlestick ended up bullish but the close was above the upper BB. Typically we should be in apposition to fade the main trend in lower time frames but we have to wait.

In the 4HR chart, we shall be watching on how prices react at last week’s highs at $15 –which is also the upper limit of our minor consolidation and $12.

Because of our over-valuation, any bear reversal pattern at $15 will be ideal. If prices break below $12, then sellers should aim at $7 or last week’s lows as their first bear targets.

As the week came to an end, we can all rest knowing that NEO sellers emerged victorious. It is for this same reason that we should be hunting for sell opportunities in subsequent sessions.

First, buy pressure anchors on price action behavior at $130. Unfortunately, after that strong bear candlestick in the 4HR chart,  sellers look to the trudging through.

However, assuming price jerk up from current levels, then every higher high will be a selling opportunity especially if there are bearish engulfing patterns in there.

Advised from this development, I will place our potential shorts zone between week ending January 13 highs and $155 as I anticipate a correction of that over-extension.

All indicators points to bears and why not? After all, we are in the second phase of a minor break out as per our previous recommendations.

LTC buyers simply failed to push prices above $210 and even if they could muster some momentum, the best they can is probably test $240 before sellers jump in at around the 61.8% and 78.6% Fibonacci retracement levels and steer price action back to normalcy.

All in all, our ultimate target remains at $150.