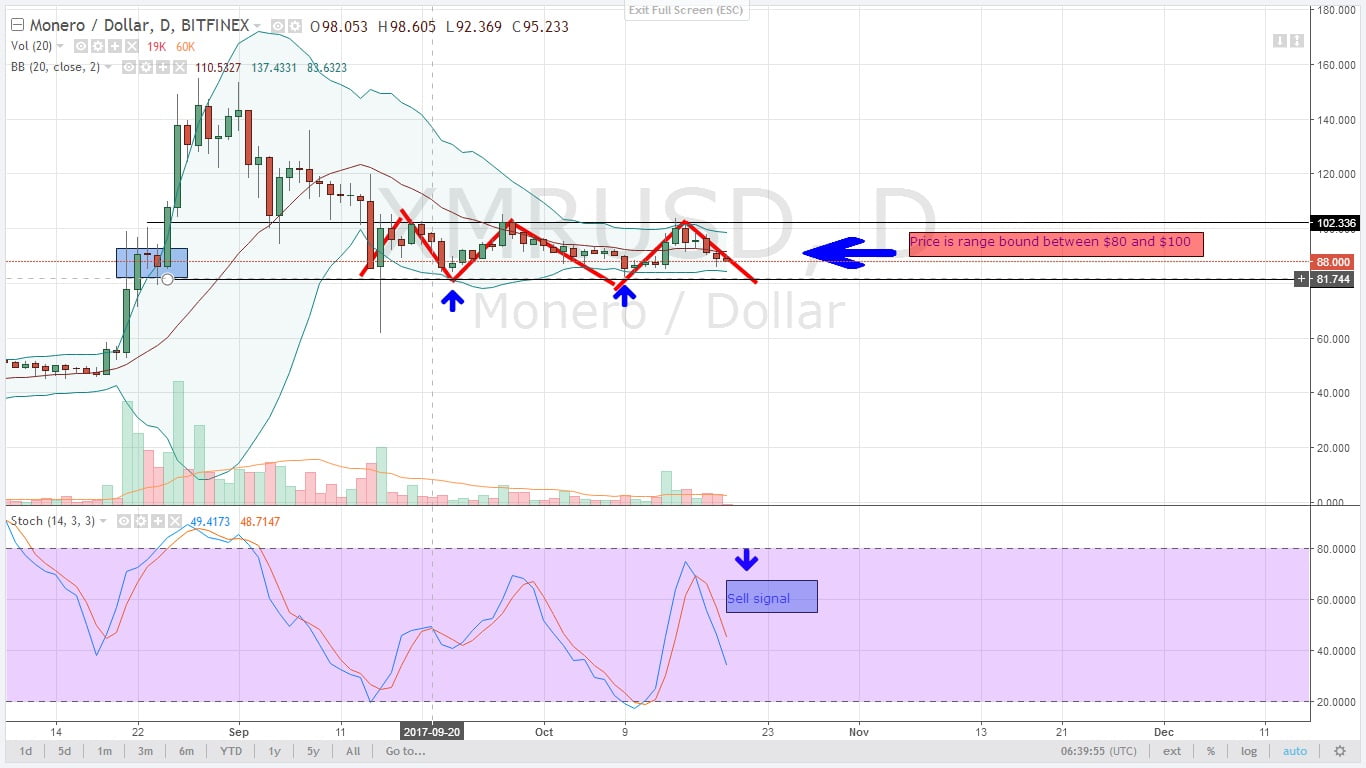 This is the second day-at least as I type this, where price action is swinging within 17.10.2017 Hi-Los of $34 and $27. We expected prices to trend higher following that bullish break out but then the 20 period moving average capped further NEO appreciation despite that bullish momentum as shown by stochastics. We retain a bullish skew but before a potential NEO run high, there should be a retest of that resistance turned support trend line at around $26. Sustained NEO depreciation below $26 means a bear trend continuation as signaled after 09.10.2017 bear break out.

In 10 days of trading, bulls are rejecting any close below $260. Yesterday, DASH breached the minor support trend line at $270 but bulls entered and the candlestick closed as a doji. I will reiterate that any DASH price below $250 accompanied by a strong bearish engulfing candle AND above average bear volumes will confirm DASH bear trend set on 09.10.2017. We have seen those higher highs retesting the support turned resistance trend line on 13-15.10.2017 before rebounding and being capped by the 20 period moving average. That can be interpreted as the second stage of a break out pattern-the “retest”. Stochastic signals bear momentum enhanced by bearish volumes which lead to a doji as yesterday’s candlestick closed.

Three days after bullish break out and IOTA is literally consolidating along the $0.45 support line. The 20 period moving average is also acting as a ceiling against further IOTA price appreciation. Stochastics are still bullish and that is important. For now, any retest of $0.45 should offer perfect buy entries for buyers. If you want to go long then place your stop loss below $0.40 while aiming for risk reward ratio of 1:3

Monero price action is still within a $20 range. Yesterday, Monero broke below the 20 period moving average support at $91 and trended lower. Bear volumes are also within daily averages and boosting sell momentum as shown by stochastics. Take profits should be within $75-80 for sellers who entered at around $100 resistance level. However, if you want to scalp, look for short entries in lower time frames.

Buy pressure is still intact and in fact LSK prices are trading above our potential resistance zone of $5.15. A potential LSK appreciation was obviously boosted by those two bullish doji candlestick of 17-18.10.2017 which attracted respectable volumes. I’m looking forward for a strong bullish candlestick either to confirm the retest of support turned resistance trend at around $6 or a bearish one for bear trend continuation. So, I advise traders to put LSK on their watch list.