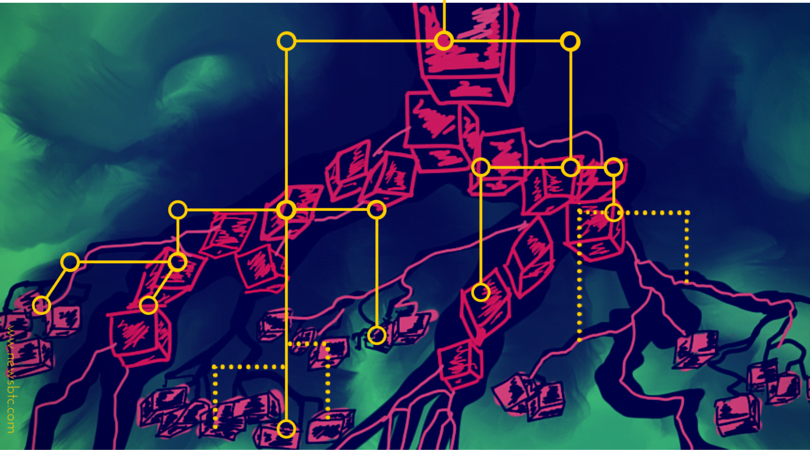 The crypto space has been referred to variously as an industry and a subculture, but now it has become something more. Using blockchain technology, we have been inadvertently building a universal data structure capable of authenticating any information known to humankind. Factom has now unlocked that potential, converting everything from health records to property titles into cryptographic form.

Using the lense of blockchain topology, we can describe the nature and make-up of the crypto space in precise terms: it is a metric space made by connecting all the known blockchains together into a giant Merkle tree, generated by a subset of the public space. The question is, what does it look like?

One of the defining features of a Merkle tree is its orientation: unlike a normal, gravity-abiding tree, it branches out to leaves at the bottom from a root at the top known as the top hash. In reality, the root is calculated from the leaves, which are concatenated (12 + 34 = 1234, instead of 46) and hashed in succession.

In keeping with the orientation established by Merkle, blockchains grow upwards, emerging–branching, in the case of a fork–from a genesis block and its transactions at the bottom to their top hash above. When you prove the existence of a file by hashing it into a Bitcoin transaction, its data structure is connected to the blockchain as one of the leaves under the upcoming block.

The crypto space follows this same format; relative to the public space, its orientation is found by locating the top hash and the bottom-most leaves. It points from the leaves towards the top hash, wherever those are at the time. It doesn’t matter: so long as they all connect to the right places, it will be homeomorphic to Merkle’s original projection, preserving its invariant properties.

So, where are the top and bottom hashes? The whole purpose of the top hash is to authenticate data that might be disputed, so it has to be stored somewhere secure. The top hash is the one with the highest authenticity, as defined in the previous article, which will always be on a blockchain–currently, Bitcoin’s.

Bitcoin remains king because it has the highest difficulty level–to use the topological terminology, its metric function has the highest slope, meaning the difficulty of cracking it increases the fastest with each block. Using difficulty as the unit of measurement, we can say that Bitcoin’s blockchain is by far the longest, with the highest number of leaf hashes.

Authenticity is not directly related to difficulty, however. A blockchain based on a network with very few full nodes has low authenticity because the network could easily be taken down, or infected with a high percentage of malicious nodes that restrict or even falsify information. There are also block formation processes such as minting that are not based on difficulty, but rather who is “staking” the most coins, for example.

Whether it’s staking coins or something practical like folding proteins or searching for extraterrestrial life, the key factor is that it’s expensive to do. This is best measured in dollars–or bitcoins, rather–and is therefore somewhat relative to the observer. It is less expensive to 51% attack the Bitcoin network in Iceland, where electricity is cheap.

The Merkle tree which generates the crypto space has many branches, most of which are dead ends (such as a traditional Bitcoin transaction), but many of which branch out further than their counterparts. Although possible, it’s unlikely for two branches to be equally difficult in length–we just need to investigate.

The bottom hash is not necessarily the least authentic or expensive to falsify, in contrast to the top hash, so we must find it the hard way. Starting from the root, explore each path until you reach the end; calculate the odds of randomly discovering that data and finding it to be a valid input, and whichever hash value is most improbable is the bottom.

Not all Merkle trees are found in blocks generated by mining, so when analyzing the crypto space, we cannot rely on summing the mining difficulty along the chain. You would require knowledge of the specific hash algorithm used at each step, as well as its real-world constraints at the time–at least until a new mathematical solution is discovered.

This and other factors make top hash theory a difficult field to study. Testing any hypothesis requires repeated trials, continuously searching for that piece of data which is most impervious to alteration. It will be an enormous project–analogous to mapping the genome–and the subject of many articles to come.