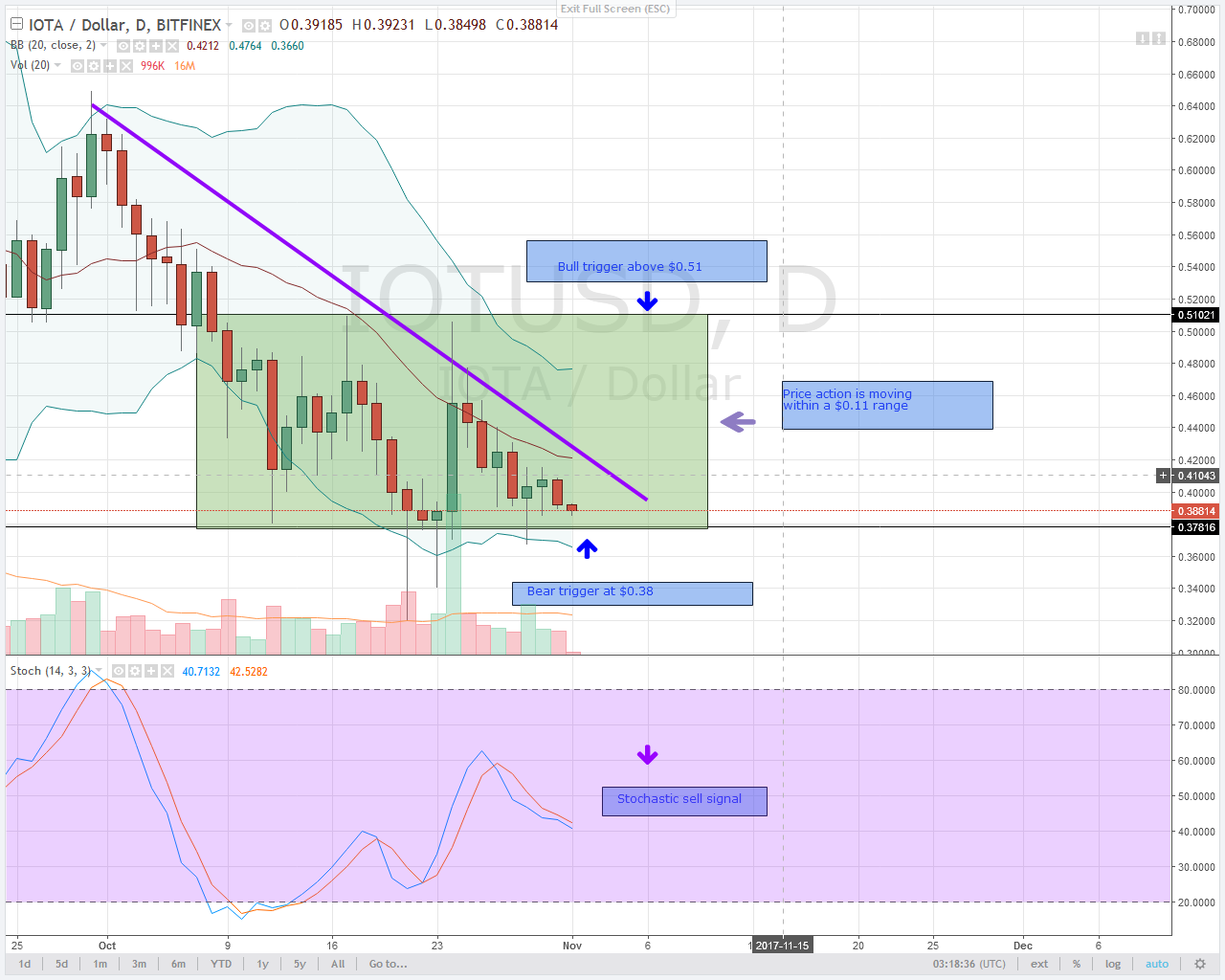 After 24.10.2017 bullish thrust, alt coin LSK has been correcting lower but within a tight $2.1 range. The correction lower has been met with strong support at around $4.7. This is the same zone around the middle BB and strictly within our support and resistance trend line triggers where alt coin LSK prices have been oscillating. Notably, it is interesting to see how LSK bulls are finding it hard to close above the 20 period MA even after that 29.10.2017 attempted push higher. Either way, price action is still within the confines of the larger bull flag with murky stochastics over the past few days. This means no definitive trend. We are also at the third quarter of this bull wedge with strong support at $4.1. USD bulls will be triggered if LSK prices depreciate and close below $4.5 minor support trend line.

Obviously, the 20 period MA is increasingly becoming our resistance trend line within a minor set of resistance and support trend line triggers. There are some strong sellers around $90 and yesterday, DASH prices tumbled and closed at $276 after testing $260. If anything, 31.10.2017 lows isn’t far away from our ultimate lows at $250 so it is hinting. Depending on the close of today’s candlestick, I reiterate that closure below the support trend line will mean the beginning of a long term correction beyond $250.

For that to happen, bearish break out should be beyond the daily average of $45 and accompanied by strong bear participants above 60K. On the other hand, stochastics are mixed and not reliable. In this case, we shall only depend on the negative 20 Period MA slope and increase the odds of a bear break out. However, before that confirmation happens, we shall be on the sidelines.

Unless there is a significant alt coin IOTA bullish candlestick, we can confirm that the 24.10.2017 and accompanying 3 bar reversal candlestick was all but a fake IOTA bull break out. The 20 period MA and the resistance trend line have all acted as reliable resistance line. IOTA bear soldiers have eroded IOTA prices from $0.51 recent highs and continue to tick lower. For now, we wait for a reaction at $0.33-$0.38 support zone. Further depreciation means USD bulls going forward. Conversely, a reversal means IOTA will be back in the $0.11 trading range.

Our minor support trend line depicting Monero higher highs relative to the lower BB continues to hold. That is important for Monero Bulls. Secondly, the 20 period MA is preventing further Monero appreciation beyond $90 and as this horizontal $20 consolidation within this BB squeeze takes shape, we need sharp surges in either DASH or USD bulls to confirm a trend. As it is, this is the 51st day of equilibrium below the 20 period MA which begun after 08.09.2017 break below. Monero bulls are likely to lead the charge as stochastics continue to trend in the oversold territory.  But, until there is a confirmation, swing trades should stay off while day traders should take long positions but with smaller lots.

Yesterday’s candlestick closed as a gravestone doji as NEO prices tested 24.10.2017 highs of $33. This above average $7 range was accompanied by a bear volume spike meaning USD bulls were in charge. NEO bearish momentum continued as today’s session opened. We can clearly see that prices are below our minor resistance trend line and the 20 period MA away from the $26-$30 resistance range. Furthermore, NEO is within a larger $10 BB squeeze. Therefore, unless there is a surge in either way, this consolidation is not profitable for trend traders.