Who Will Win This Battle: US Dollar or Bitcoin? 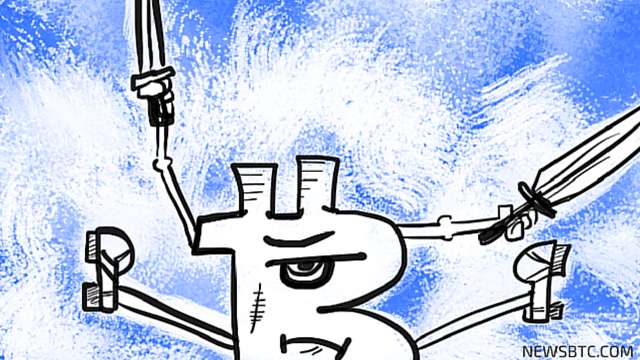 ,Janet Yellen the Chair of the US Federal Reserve, is expected to announce the lift-off of interest rates from historic lows in its December 15 meeting. A better-than-expected jobs report also raised confidence that the US economy is primed for higher interest rates.

But, how does that concern the Bitcoin ecosystem? To understand this in a simple way, let us see how Bitcoin has performed against the US dollar in the past two years. Below is the weekly U.S. Dollar Index chart compared with the BTC-USD pair in the lower section.

From June 2014, as the US Dollar Index started its upward journey, the BTC-USD pair witnessed a strong downtrend. The inverse relationship lasted until February of this year, when the unprecedented rally in the U.S. Dollar Index petered out.

During said period, the U.S. Dollar Index entered into a 9-month long (approx.) sideways consolidation. When the U.S. Fed decided to hold off on raising the interest rates in the Oct meeting, it became clear that the official announcement would be made in the Dec meeting. In anticipation of this event, the US dollar gave a breakout and reached an all-time high of 100.51.

Surprisingly, at the same time, the Bitcoin price also broke above its resistance and hit $500 rapidly. An aggressive speculative interest in Bitcoin pushed the pair higher during this time.

Currently, both the currencies in the BTC-USD pair – BTC being the lead currency and USD being the base currency – are attracting strong bullish action. All eyes are now set on the outcome of the U.S. Fed December 15 meeting. If the interest rates are left untouched or the hike in interest rates is less than expected (to the tune of 10 basis points), we may see a strong fall in the US Dollar Index and another leg of the rally in Bitcoin.

But, if the rates are increased by 25 basis points, weakness in the BTC-USD pair cannot be ruled out on account of a strengthening dollar.