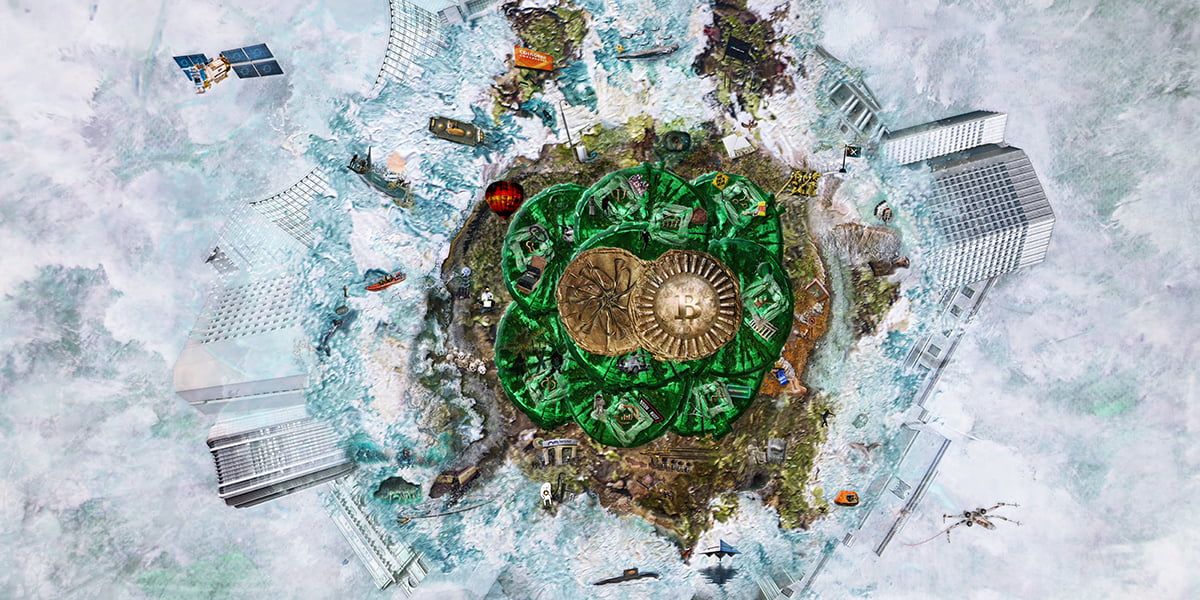 About 5 months ago, I got connected with a Bitcoin O.G, from what seems to be the origins of BTC, or very close to it. He commissioned me to make an art piece of his knowledge, which he thought should be recorded in this form to history. He spoke very cryptically at times, and the biggest reveal was that Bitcoin was born out of 8 fields of expertise. It doesn’t take a rocket scientist to quickly infuse, that these experts in the fields of:

Now, this doesn’t mean I was told who they were. As a matter of fact, I did not want to know, nor was he in any way keen to dox them. I love and respect Bitcoin, and understand which kind of witch hunt they would have to go through, should they ever be revealed. I don’t need that kind of negativity in my life. The code and the protocol work, even if it was Zeus who birthed BTC, so all good on my part.

Watch this 30-minute documentary film explaining a lot of it. The video also includes a QR code for 21 individuals to claim 1000 $VESA each to motivate a deep dive.

The other big reveal was how the idea was, to begin with, even before it was technology – to birth a religion and a belief system. I had never heard this articulated this way before, and having met many maximalist, it made sense to me. This kind of thing, of course, knowing the fundaments of what Bitcoin is up against, makes a lot of sense. Anyone who listens to the likes of Michael Sailor or Andreas Antonopolous will understand this, without any need to go too dogmatic. It’s simply the laws of thermodynamics in a time where everything else bleeds value out like crazy. Want to know why Princess Leia is strangling the Doge?

Five months of work compressed to a single expression that includes thousands of years of history within a holistic perspective.

These five months of a labor of love and respect, which made little economic sense to me are now available in this art piece, as well of course to support my work via buying it. I was fairly compensated for a commission, should the project have lasted a month, but due to my own ambition it stretched to five, so the expression could fully accommodate what is being presented. It was another hero’s journey of sorts, to help the mixture of references to come alive via truth in a time where we go further into muddled waters of information.

The first re-paint of the most popular form of investment level art is now with the O.G. Out of the edition of three only, the second will cost 2 BTC and the last 3 BTC. The fiat purchase price is slightly higher. There is also an edition of 50 of 1200$ prints available, out of which the first one was pre-sold sold to Ben Leff, so I could continue this project until the end more comfortably. The sole 80×40 in metallic print is also available for $50K USD. This version can be heavily customized for a serious collector. All three re-paints are also part customized for the collector, infusing part of what is important to them into the work. This is the eternal evolution of art compressed to what is now possible.

Buy it here: The Br8ve

Ps. As the token chase reveals, I am no maxi myself, but a centrist certainly. My token is not listed on any exchanges and remains an internal reward method for my own ecosystem.

There will be 21×1000 $VESA available in the soon dropping 30-minute “The Br8ve” mini doc as an attention reward treasure hunt.#NFT #NFTs #cryptoart pic.twitter.com/aihuGua3f0